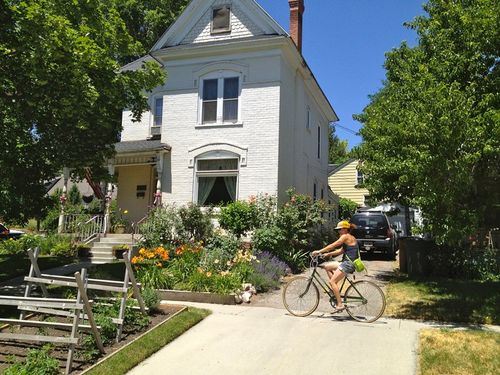 Bleeding sunburns and limping – those were my earliest memories of people returning from RAGBRAI. What’s that? You don’t know what RAGBRAI is? (I’m just as shocked when people don’t know what RAGBRAI is as the Canadian who realizes that Americans don’t know who Terry Fox is.) RAGRBRAI is an acronym for Registers Annual Great Bike Ride Across Iowa. Yes, that’s right – a bike across the entire state of Iowa. RAGBRAI is a non-competitive bike ride that starts on Iowa’s western border by dipping a rear tire in the Missouri, and ends, approximately 475 miles later, on the eastern border, after dipping a front tire in the Mississippi. The ride averages around 70 miles a day. Currently, close to 10,000 riders participate in this every year. If you are from Iowa, you have to do it at least once in your life to be considered a true Iowan. Or at least house, feed, shower, or cheer on a rider.
RAGBRAI stops at eight host communities along the way with the route changing every year. The whole state awaits the announcing of the route, which happens in March. Trust me, it’s a BIG deal in Iowa if RAGBRAI stops in your town. The whole town goes ape shit and it’s all anybody talks about for months.

Why, you might be wondering, would I, someone who has an extensive passport stamp collection, climbs 200 days a year, is out of town at least that many days, and grows 15 types of heirloom tomatoes in her garden, choose to spend over a week in Iowa… riding a bicycle… in July? (I assure you, Iowa summers are hell on earth with heat and humidity.) Simply put, I’m from Iowa, so I have to (it’s like being from Florida and never going into the ocean). AND, my uncle, who’s participated seven times, kinda dared me at my cousin’s wedding last fall. I said I would do it, but he warned, “You ride every day, drink every night, sleep in a tent, get very little sleep, shower infrequently and wear the same clothes for a week.” Substitute “climb” for “ride” and you have my life. “Sounds like my last vacation!” I was getting cocky. 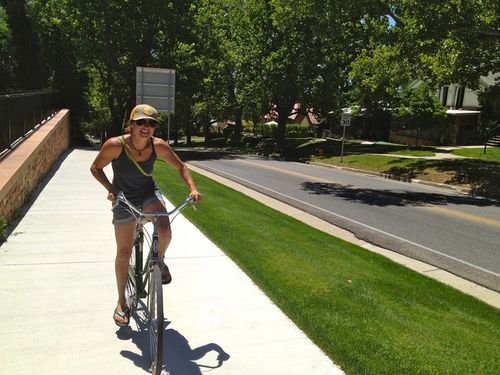 My uncle suggested that regardless of my physical condition as a fulltime climber, I should train for RAGBRAI by riding at least 1,000 miles beforehand. That gave me a good idea. I Google mapped SLC to Omaha on my iPhone. It was 932 miles! Perfect, I’ll just ride a bike there and then to RAGBRAI! Save money on a plane ticket! But then there was that pesky Continental Divide to consider.

By the end of the wedding reception, my uncle offered me a spot on their team and I agreed. It’s been eight months since then, and as the summer wears on, so do my excuses for not getting serious. I mean, I’m serious… I’m seriously going to do it (I have a Delta flight, SLC-CID, booked) but am I going to go out and buy a “ten speed” and all the fancy stuff that goes with it? Can’t I just ride on the same bike I run errands on in SLC in the same Patagonia yoga clothes that I test for Walker? 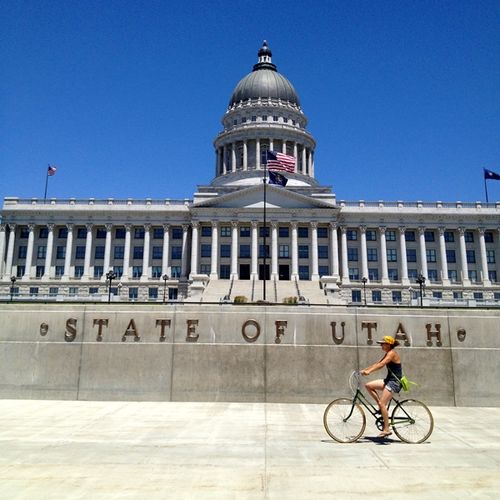 To avoid feeling like I’m shirking my commitments to training, I’ve started to equate my normal daily activities into “miles spent on a bike for training.” Four hours of weeding = 20 miles? One hour of vigorous vacuuming = 15 miles? Packing and unpacking the van = 10 miles? Seven pitches of 5.12 = 30 miles? Today, I decided to get seriously serious: I rode my 1972 Schwinn Breeze around the city park. It’s a flat, 1.6 mile loop that I did 10 times in an hour. I didn’t get tired so much as bored, so I stopped. But I won’t get bored on RAGBRAI, so I’m sure I can go a lot longer.The first RAGBRAI was in 1973, and one of those riders was 83-year-old Clarence Pickard. He rode a women’s Schwinn and wore a long-sleeved shirt, trousers, woolen long underwear and a silver pith helmet. So me riding my Schwinn Breeze in yoga clothes wearing flip-flops isn’t so crazy after all, eh? Please, some of you say “yes”… 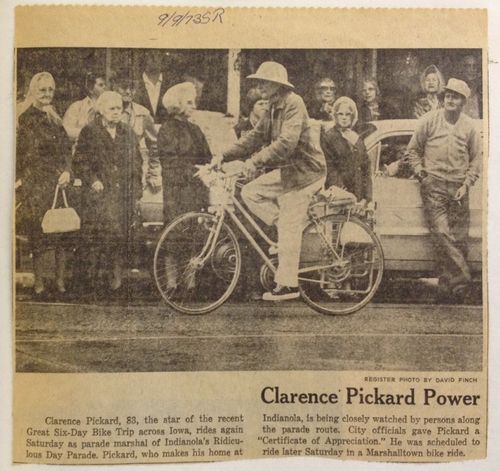 Photo from “Thoughts from Grampa RAGBRAI.”