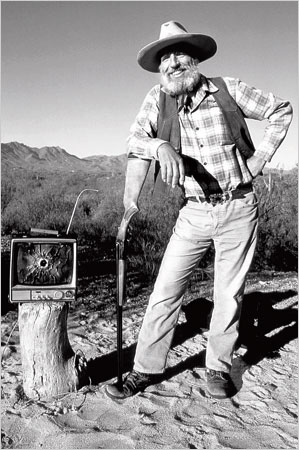 The first time I heard Edward Abbey's name, I was sitting in a literature seminar. A restlessness had been brewing in the class, but no one could put a finger on it. All this inspirational literature had stirred something in us–we wondered why our suddenly precious time was being spent talking about 'theme' and 'technique' when what we wanted most was to heed those authors' invitations and set to work changing the world.

We opened the standard Cactus Ed starter text, Desert Solitaire, and while the instructor droned through the minutiae of yet another author's life, I aimlessly trolled the pages, arriving at this passage parked at the end of the book's preface: "…most of what I write about in this book is already gone or going under fast. This is not a travel guide, but an elegy. A memorial. You're holding a tombstone in your hands. A bloody rock. Don't drop it on your foot–throw it at something big and glassy. What do you have to lose?"

This? At the start of his first book? Years before anyone knew the legend he would become? This man had something to say. I thought I had better pay attention.

What Ed Abbey had to say filled a career that changed the lives of an entire generation of environmentalists. To this day, he remains an iconic and inspirational voice, one that is at once deeply conservative and expansively liberal – a man who's life gave shape to that great Emersonian insight that "a foolish consistency is the hobgoblin of little minds." He saw his tome as a tombstone and urged us to hurl it at the establishment, and then, barely a heartbeat later, claimed, "[m]y own ambition, my deepest and truest ambition, is to find within myself someday, somehow, the ability to…do nothing–and find it enough."

Saturday, March 14 marks 20 years–to the day–since Abbey's passing, and grassroots radio maestro, Don Darue, has a little something to help doing nothing feel like enough. Don's been "servin' 'em up covered and smothered" for 20 years on the homegrown radio show The Risky Biscuit Hayseed Hoot. One of his specialties is the Annual Edward Abbey Memorial Tribute Edition of the show. Saturday is the 19th-edition of Dondo's incomparable blend of tasty instrumentals, blues, folk, outlaw country, and a generous helping of Mr. Abbey reading straight from classics such as "In Defense of the Redneck," "Freedom & Wilderness, Wilderness & Freedom," Desert Solitaire and others.

Get some Ed in yer head this weekend. Sidle up to the Hoot Hut and have a listen to this year's Ed Abbey show. Starting Saturday morning, it will be available for a full week via podcast at the Hoot website. You can also listen live Saturday morning, 8 – 10 a.m. Pacific, by going to www.kthxfm.com and clicking on the "Listen Live" button (on the right).