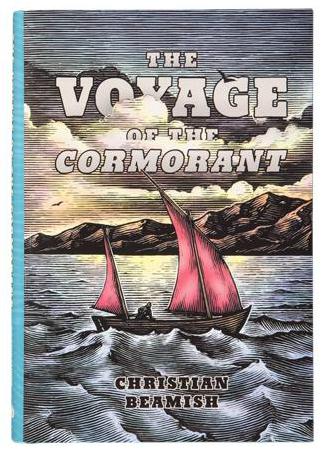 Patagonia Books is proud to announce our latest release: Christian Beamish’s first book The Voyage of the Cormorant, which tells of his journey down the Pacific coast of Baja in an 18-foot open boat he built himself. The book includes maps and is illustrated by Ken Perkins. Below is an excerpt:

A full moon rose over the arroyos, the desert held a pinkish glow, and stars shone down like a compliment in a million points of light all across the water. I sailed along, swaddled against the cold in a parka and outer shell, drifting in my thoughts deep into the night. Eventually, the wind fell away, and the ocean settled into a broad, glassy sheet. I smelled the clean desert scrub on the suddenly warmer air. The lines and sails and my outer jacket seemed to crackle in the dryness.

I knew that this was all the warning I would get.

Lashing the tiller in place with a bungee, I scrambled forward and dropped the main sail. Not one minute later, I saw and heard the wind line across the water behind, roaring down and tearing at the surface like a swarm of locust: the dreaded Norte. People call it the devil wind because of the fires it breathes to life and, I suppose, for the madness too. It is a terrible, mindless thing. 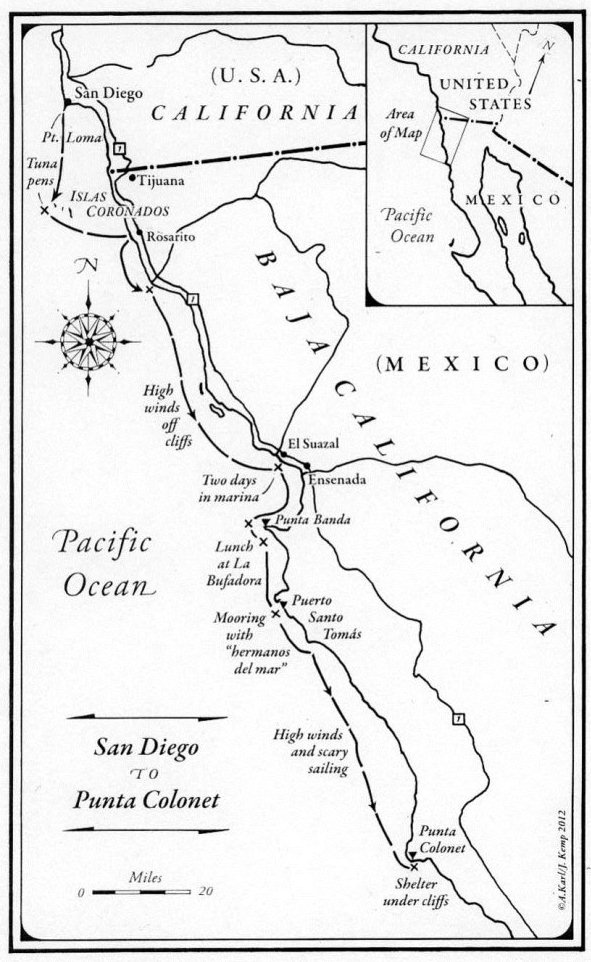 The wind did not slam into us so much as gather up and consume us, then sling us forward with spindrift and foam flying all around. Both hands on the tiller, I pulled hard to keep Cormorant running before the short and steep waves, surging ahead on the bigger swells with a strange vibration shuddering throughout the hull. A couple of steep lurches put us right on the beam-ends, the very scenario of capsizing in a raging sea that I had imagined, and cold water slurped in over the rail and filled the boat to her bilges with a frigid foot-bath. But the danger was too immediate to think of anything beyond keeping the boat upright, even if somewhere in my consciousness lurked the image, inevitable it seemed, of going over.

How long did I run like this? It seemed a lifetime, as the intensity of the flashing spray, the points of starlight dancing weirdly, and the moon gleaming off the waves kept my gaze locked just ahead of the bow – the steeper swells catching my peripheral vision as they swept alongside and hurled us faster on.

My hands ached with the strain of holding the tiller, and then my upper arms and shoulders began to burn. There was no option for relief. Steering through the steep troughs was the only way to remain upright, and although I was sailing on the small mizzen alone, it seemed even bare poles would have been enough for the wind to drive us dangerously fast.

I had come in closer to the shore and found myself a few hundred yards off a wide sandy beach. The wind here blew straight offshore over what appeared to be a series of dunes, and lumbering swells rose up with spray sheeting off their tops like fireboat hoses in full harbor display. 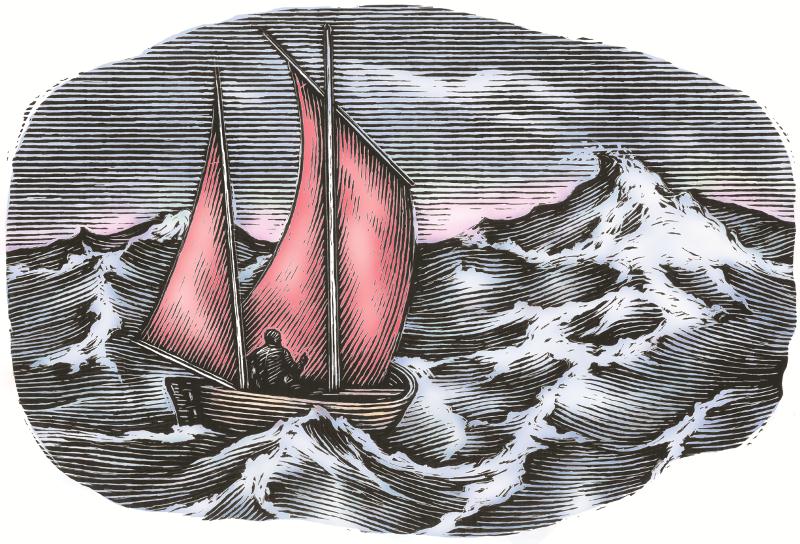 In the blue dark of the night, which for all its violence, had a magical quality, I thought I saw a light in the dunes. The surf was well shaped and eight to ten feet. I imagined a longtime surfer set up here in a camper, and the thought of an old bro and his dog made me smile. I was so sure he was there that I considered making for the beach through the big surf. But I read the conditions for a moment longer and realized that I would lose everything if I tried to make it in. I sailed on.

The wind still hurled us down the coast, the occasional tendril of kelp wrapping the rudder blade like a tentacle and then breaking free with the inexorable force of our momentum. Though my hands, arms, and shoulders were knotted with fatigue, I was prevailing in the fight to keep the boat steering in line with the waves. I even got the hang of riding out the bigger ones, and actually hooted once with the fun of linking one wave with a second and then a third steep swell for a shooshing toboggan slide of more than 100 yards.

I recognized that Cormorant was handling herself and that her pointed stern split the waves like cordwood, allowing them to roll off to either side. I had only to maintain my course, and if I managed to avoid running up on a reef, I would eventually make the sheltering cliffs of Punta Colonet. It was an absurd situation nonetheless – the roaring wind and desolate shore, this long winter night and the ghostly moonglow illuminating the whitecaps off into the distance – completely alone in my open boat, 250 miles down the coast.

Then I sang. For the ridiculous peril I faced, for my folly, for grace, and for a prayer. I sang the old Anglican hymn “Praise for Creation,” and the wind became almost funny at that point – the absolute opposite, the utter rejection of morning and calm. The fact that no one in the world had a clue as to my predicament, or even, precisely where I was and, even more so, that I had put myself here struck me somehow as humorous. “Blackbird has spo-ken,” I belted out in the rage, “like the first bhir-hi-hi-hirrrd!” 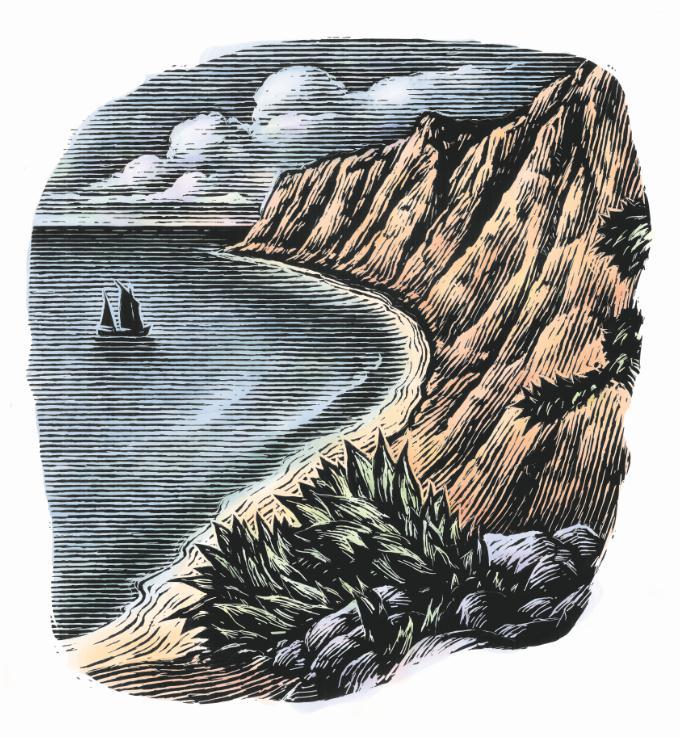 I had come in close now, spray blowing back off the crashing surf just a few hundred yards in, and the high cliffs of Colonet loomed ahead. As I had hoped, when I sailed to the base of the sheer walls, the wind passed overhead, 300 feet off the mesa, and left the water calm and strangely still, even as the ocean went ragged not 100 yards outside.

I could have scrambled up the boulders to kiss that old cliff face for the shelter it provided.

I set anchor and then put booties over my wet wool socks, slaked my thirst with deep draughts of fresh water, and mashed handfuls of trail mix into my mouth. My body shook with fear, exaltation, and relief. I wrapped myself in the mainsail, too exhausted to arrange the boat tent and sleeping bag.

The moon and stars had burned into my irises, and light patterns swirled hypnotically behind my lids. With these strange points of light in my vision, I wondered if this was what dying might be like.

Read the rest of the story: The Voyage of the Cormorant is available now from Patagonia, Powell’s and Amazon.