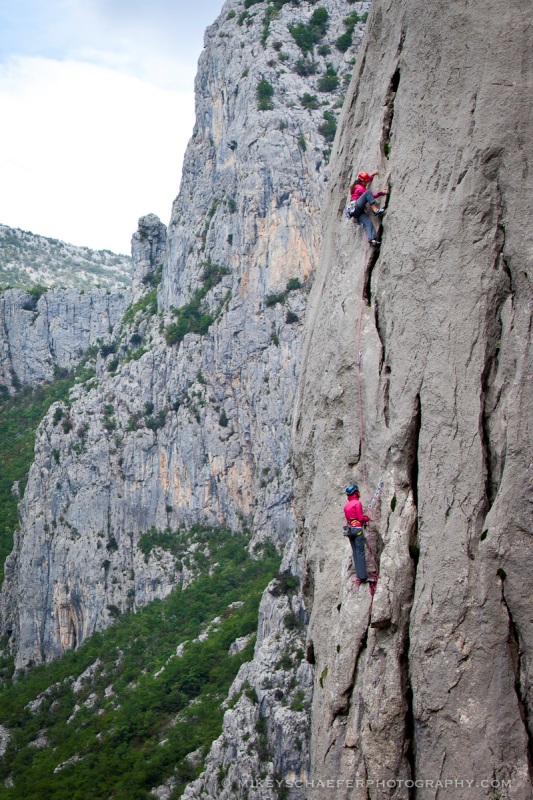 I had only just returned from Algeria, dumped the contents of my well-used Freewheeler Max into the washing machine and put everything right back in there before heading to Croatia. I only had 10 days for the trip, but it was so perfectly set up I couldn’t resist – Kate and Mikey would already be over there with ropes, rack and rental car, AND the Croatian International Climber’s Festival would be happening, WITH a big-wall speed-climbing competition. How could I NOT go?

And I’ll be completely honest. Like some women have shoe fetishes, I have a passport-stamp fetish. I love to travel. I love everything about it – even the sucky stuff like lost baggage, not being able to read the street signs, corrupt police demanding bribes, goat butter and Charles de Gaulle Airport. And I feel that one of the best things about travel is experiencing it with good friends. Remember when you were little and you could play with certain friends for hours and hours on end and not get bored or annoyed of it? Well, hanging with Kate and Mikey is like that. They eat the same go-to food as me  (yogurt, salami and beer), can sleep 10 hours a night, don’t need to shower or wash their clothes and they laugh at all my jokes. 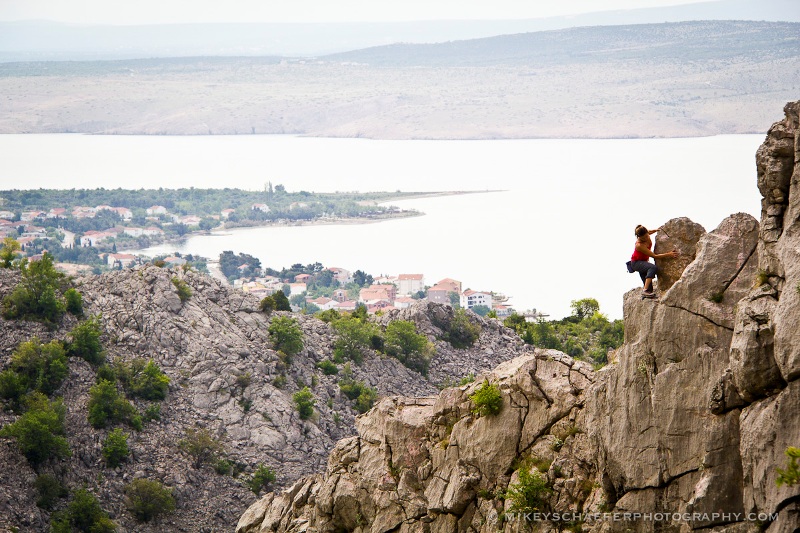 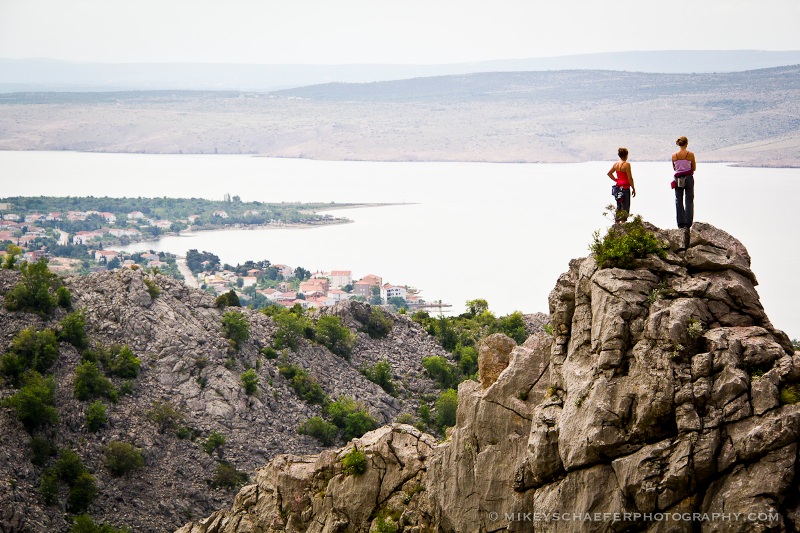 Coupled with the fact that I didn’t have a Croatia stamp in my passport, that the Google Earth image of the country appeared to be a giant, seaside limestone cliff, and that I couldn’t plant my tomatoes for another month, I decided to book the plane ticket for Croatia, a country I knew little about. I would soon learn that Croatia’s currency is the Kuna (coolest sounding currency ever!). Ten Kuna buys you a liter of gas, three postcard stamps or a giant mug of beer. Other awesome things about Croatia include: everyone under the age of 60 speaks English, the food is simple yet so good (e.g. salad, meat/fish and french fries) and fig trees grow like weeds. We rented a modest apartment within sight of the Paklenica National Park that came complete with a fully loaded kitchen, washing machine, two bathrooms and herb garden (from which I routinely foraged). Within walking distance were the pub, Adriatic seaside, grocery store and crag (in that order). Not bad for 20 bucks a night. 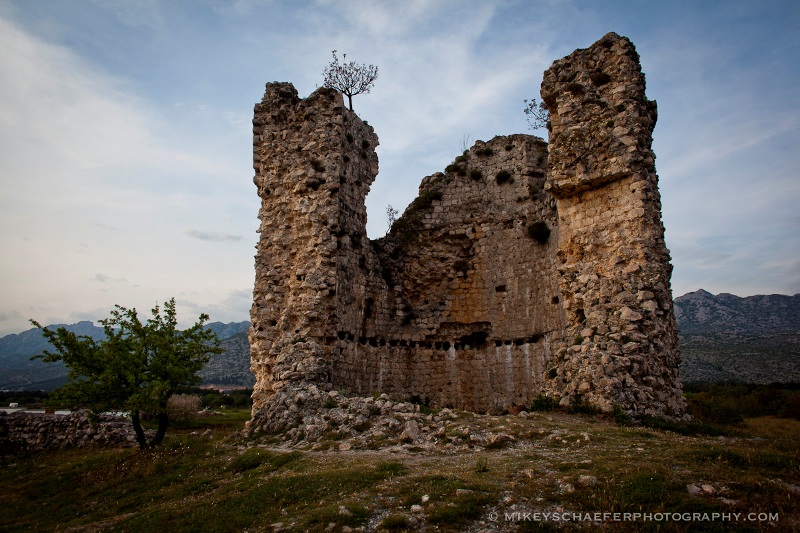 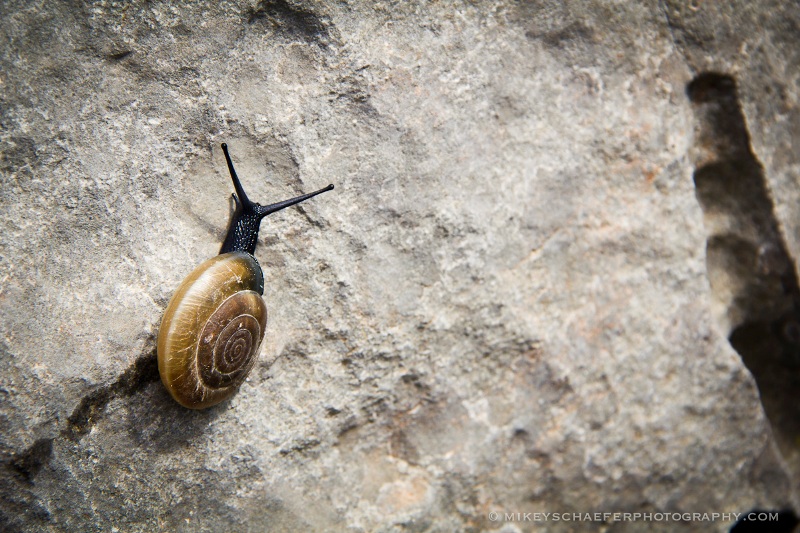 [Sharing the cliffs with some of the wildlife. Photo: Mikey Schaefer]

Three hours and a beer (small one) after landing in Zagreb (total travel time SLC to ZAG was 17 hours), I was rock climbing. The Croatian International Climber’s Festival’s “Big Wall Speed Climbing” was the next morning and Kate and I had to practice! We checked into our hotel room (two nights with meals, paid for by the organizers!), dug out my harness and shoes and hiked five minutes to the route. We practiced the 130-meter 5.10 climb two times (I know, 130 meters isn’t really a BIG big wall, but it was big enough…) and then hurried off to enjoy complimentary dinner and slideshow, which the presenters impressively delivered in both Croatian and English.

The next morning Kate and I waited anxiously for the competition to begin. It was supposed to start at 10am, but the Spanish team (who had arrived late the night before), by the grace of the hospitable organizers, was allowed to practice the route for an hour, delaying the start. This was fine as Kate and I learned some sick dance moves from the local Croatian team to stay warmed up.

Kate and I climbed the route in 17-plus minutes, which the emcee (again commentating in two languages) declared a “really, really very fast time” and good enough for second place. The local girls won (rightfully so), but everyone there made us feel like champions with their sincere enthusiasm and geniality. And Kate and I were both awarded with the coolest glass vases for second! 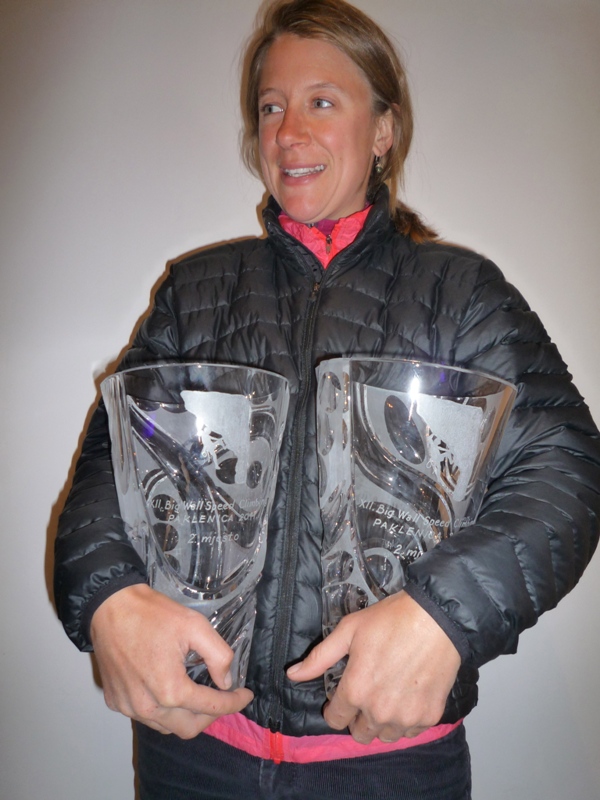 For the rest of our stay we enjoyed the beautiful scenery and quality climbing (as good as France’s Verdon, I swear!). Day after day we would wake up late, stroll to the crag and have our pick at one of the dozens of outstanding multi-pitch limestone lines. Once finished we would stop off at the pub for a beer and then head back to our little apartment for dinner, shower and comfy bed. What’s not to love about that? If you are planning a European vacation and want to go somewhere a bit more off the beaten track (just pronouncing Croatia sounds exotic), but easy to navigate with spectacular sea and mountain vistas and wonderful people, it’s worth checking out. And if your schedule allows, be sure to be there during the festival – it was a blast and a fantastic chance to immerse ourselves in the local community. 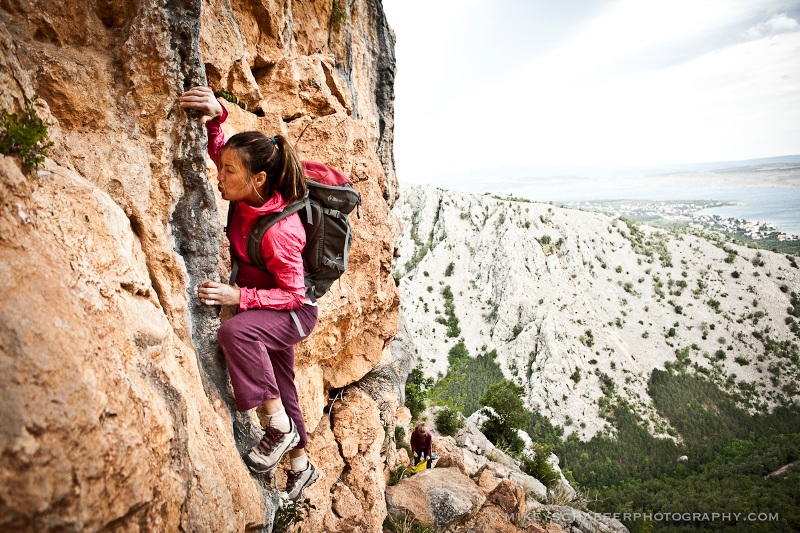 For more on our trip, you can check out: