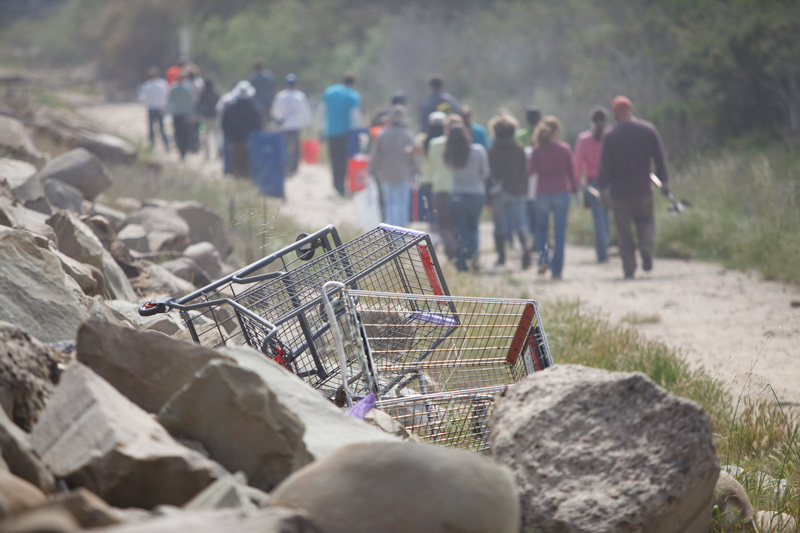 On a chilly Friday afternoon I took the short walk from Patagonia’s campus to the parking lot for the Ventura River, where employees of Patagonia, Deckers and Horny Toad had gathered for our first Backyard Collective clean up. This stewardship event had been created by ConservationNEXT, part of The Conservation Alliance, in partnership with Santa Barbara Channelkeeper, and the three companies. I checked in with a friendly volunteer, who reminded me to wear a long-sleeved shirt and pants for protection against poison oak. I hurried back to my desk to retrieve a long-sleeved shirt, but had no pants. At least my arms will be protected, I thought.

Arriving back at the parking lot, I caught Patagonia CEO Casey Sheahan’s welcoming remarks. A few city employees got up in front of the crowd to talk about safety, letting us know what we would see in the dense brush by the river. They spoke about the hundreds of homeless people who reside in makeshift camps, and that we were not to disturb their belongings. The Ventura Police were there to make sure everyone felt safe.

Once the talks were finished the crowd broke up and divided itself into small work groups, each assigned to a section of the river. Before we walked down to the river, our group leader passed out latex gloves and surgical masks. I pulled a large, wheeled garbage container full of shovels over the rocky dirt path. Once we arrived we split up into pairs.

Working quietly, we picked up trash beneath the noisy Highway 101 overpass, and then walked into the thick bamboo, where we found a tent without its occupant. We picked up trash around the tent, and also picked up scattered paperbacks and neatly placed them on a small table next to a worn-out chessboard. A kind soul from Horny Toad stopped by to help us unbury a heavy, waterlogged trash bag, and load it into his trash container. After working for a few hours we were told by our group leader that we were done for the day and it was time to leave.

On our way out, I spotted a rusty camp chair in the river, lying on its side. I scurried down a steep, dirt embankment to retrieve it. Stepping into the river I felt its cold water pushing against my legs, felt the soft, uneven river bottom beneath my shoes. I listened to the river, its sound everywhere, and in that moment connected to the natural world. 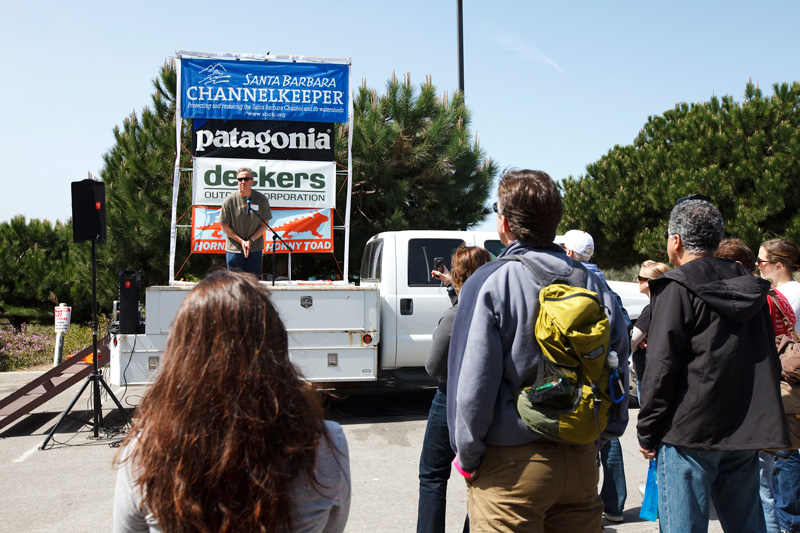 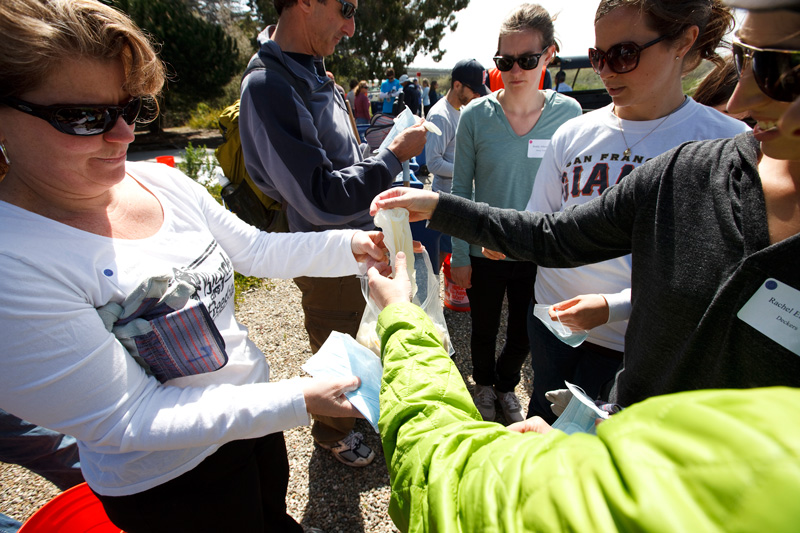 [Handing out the gloves and masks.] 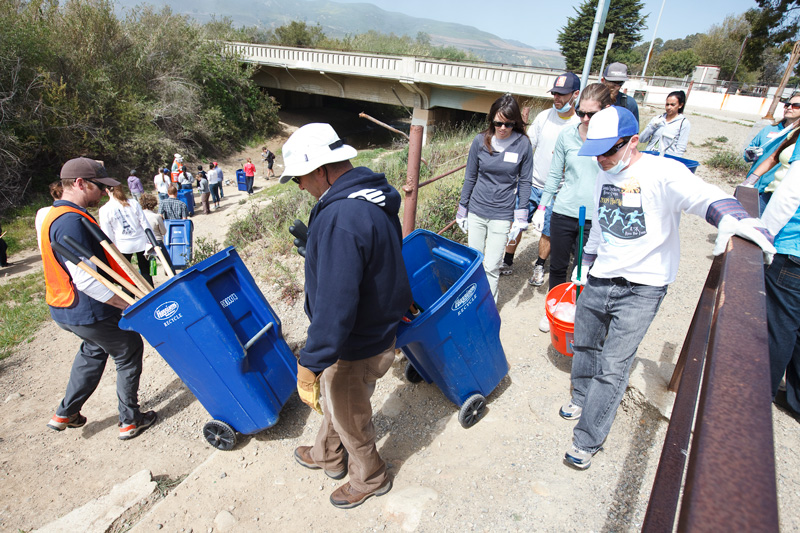 [Heading down into the river bed.] 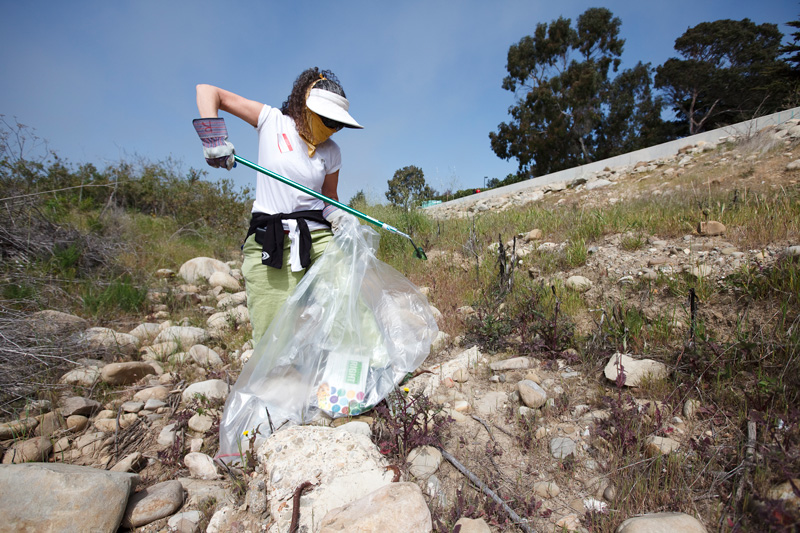 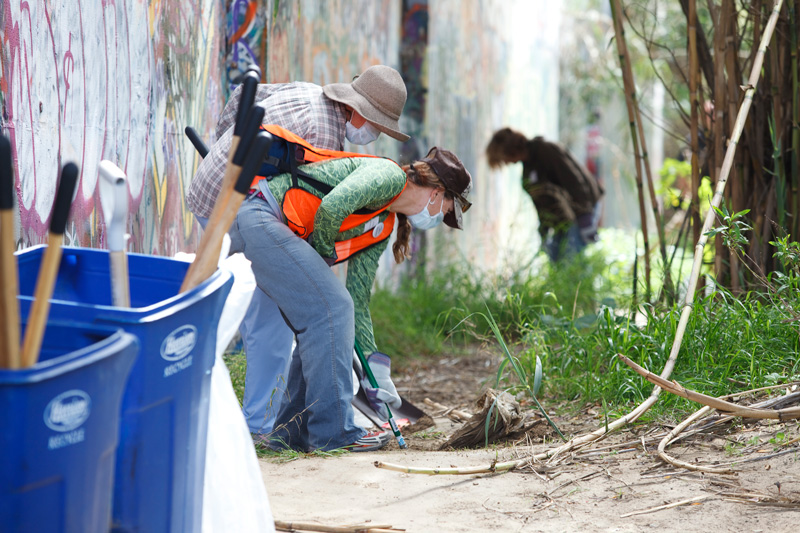 [Digging out some buried trash.] 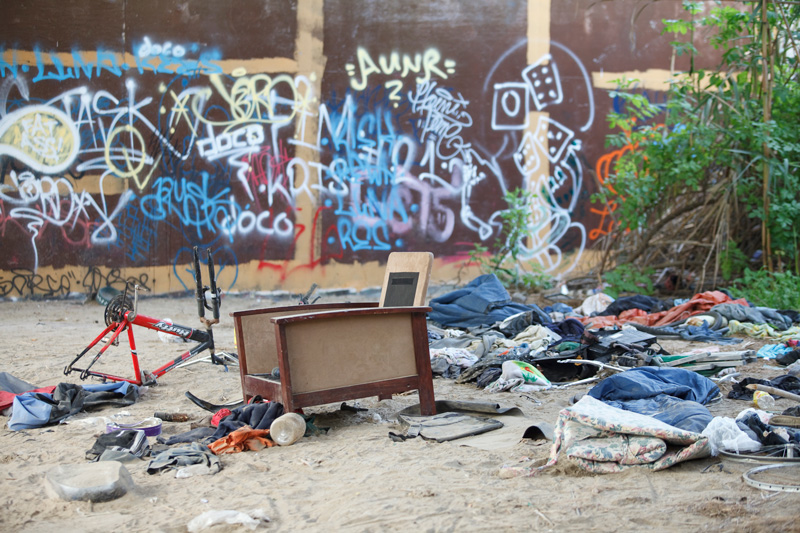 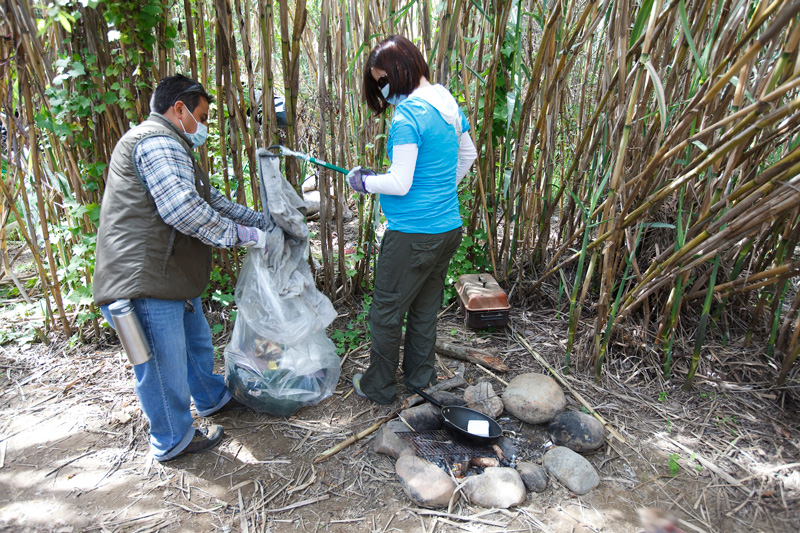 [Manny and friend separate the trash from the belongings.] 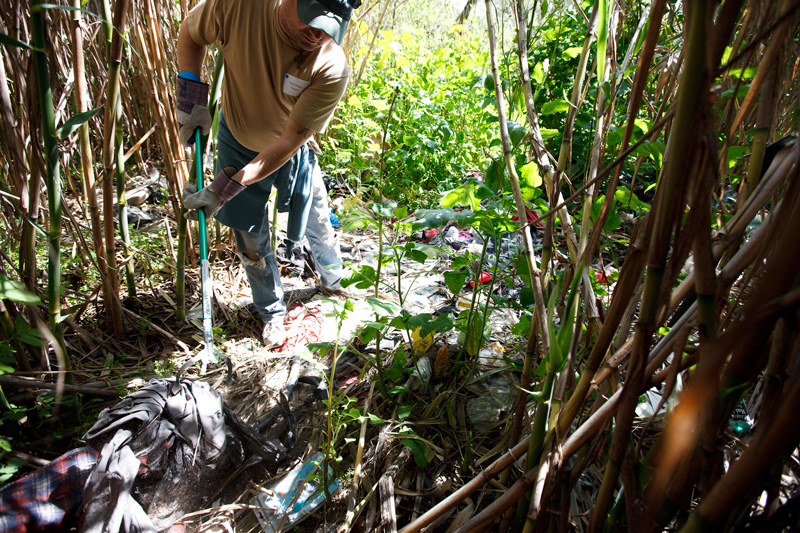 [Peter goes deep into the bamboo.] 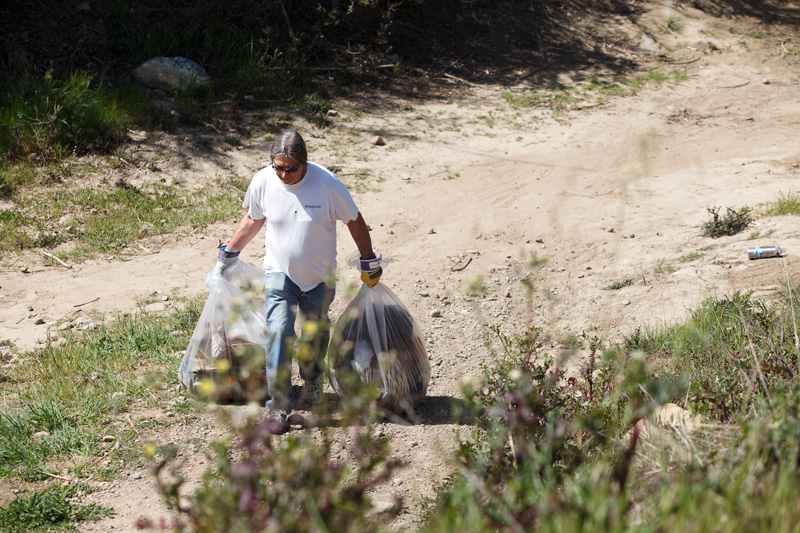 [George hauls two of the many bags that were filled with refuse.] 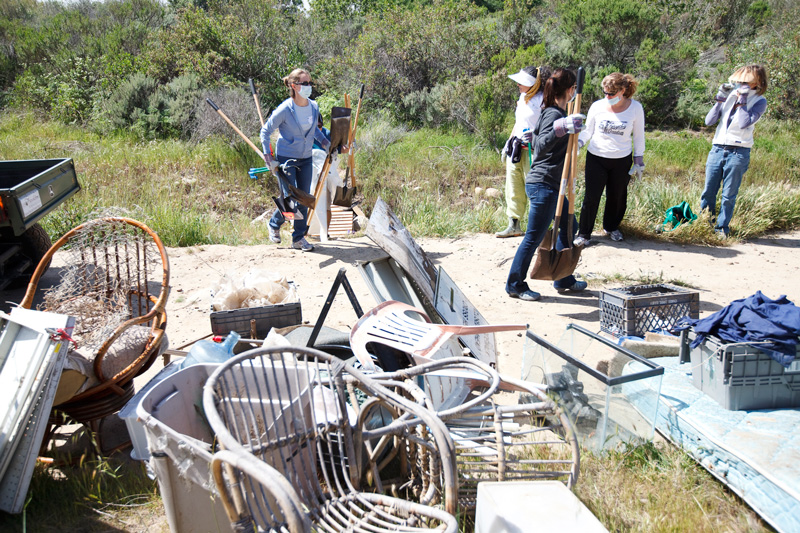 [Finishing up the work.] 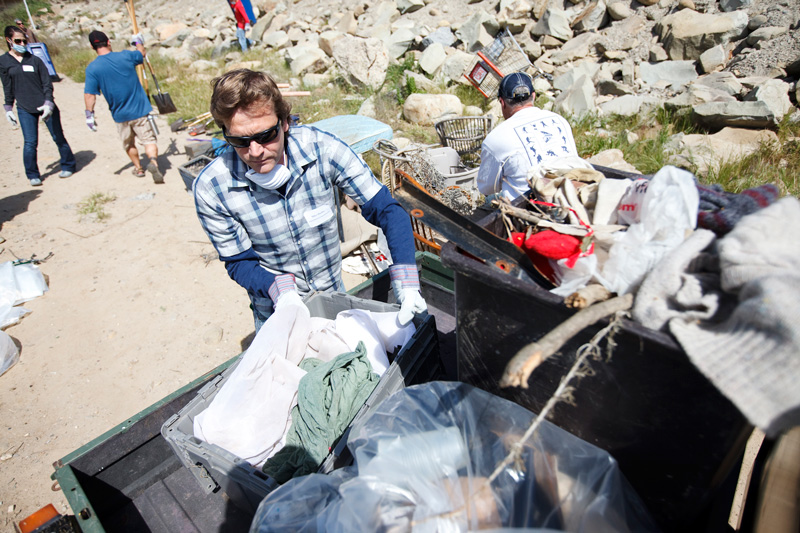 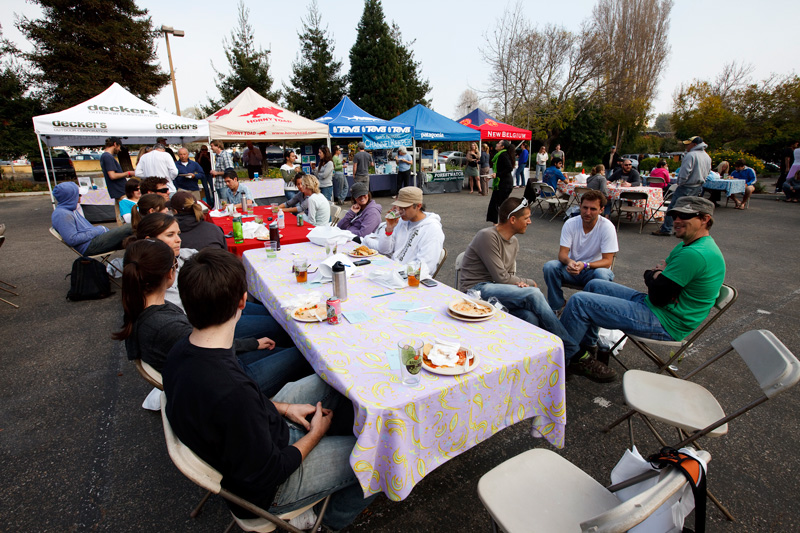 [Afterwards, the volunteers regrouped at Patagonia HQ where they were treated to tacos from Spencer Makenzie’s Fish Co. and Ranger IPA from New Belgium Brewing. All party photos: Jenning Steger] 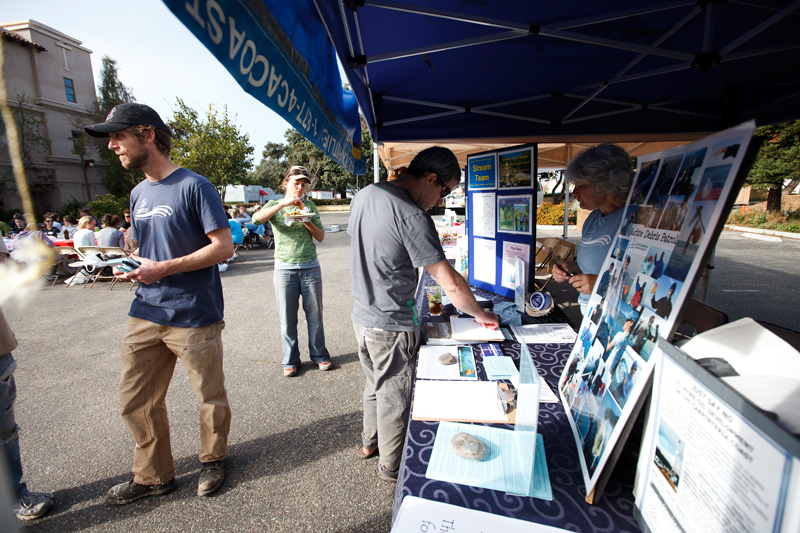 [The SB Channelkeeper booth had information on their Stream Team program.] 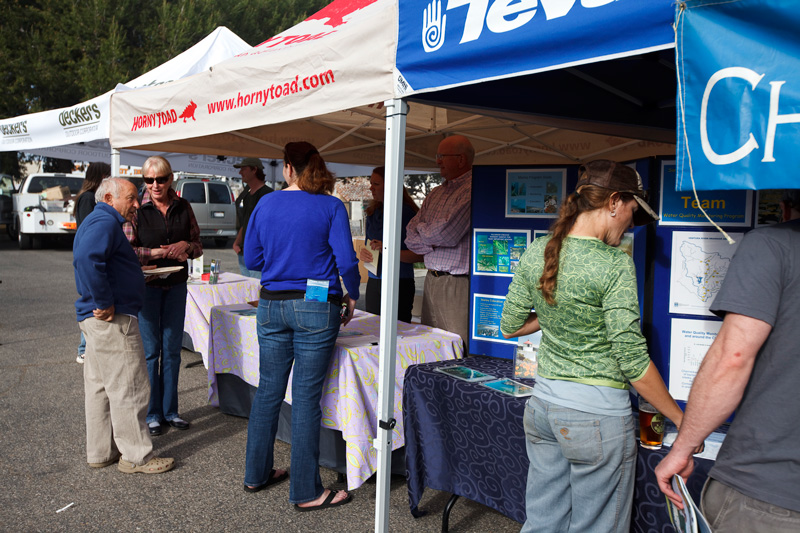 [Yvon Chouinard has been working, in one way or another, to restore the Ventura River since the early ’70s.] 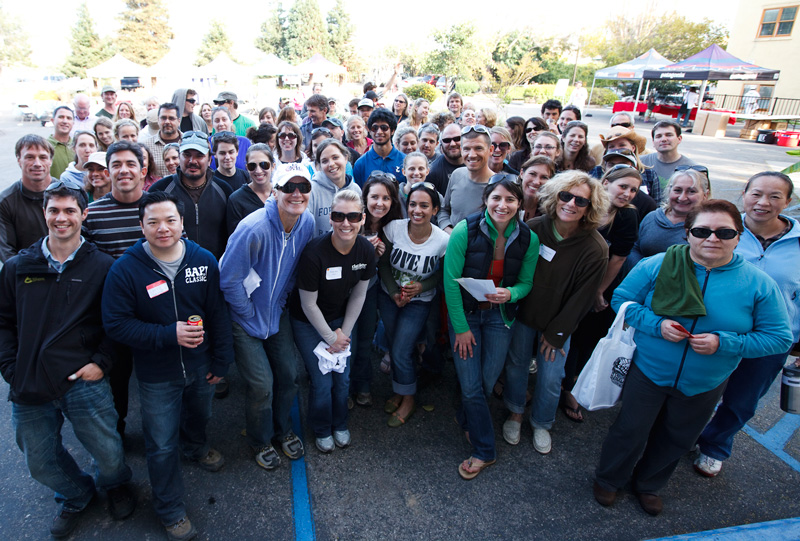 [A big thank you to all the volunteers and organizations for participating. Special thanks to Deanna Kavanaugh-Jones and Liz Ferrin of ConservationNEXT for organizing the event. Photo: Jeff Johnson]

Editor’s note: Coincidentally, our co-workers at Patagonia Dublin recently did a beach clean-up of their own in conjunction with Surfrider Foundation Europe. Here are a few photos from the Emerald Isle. 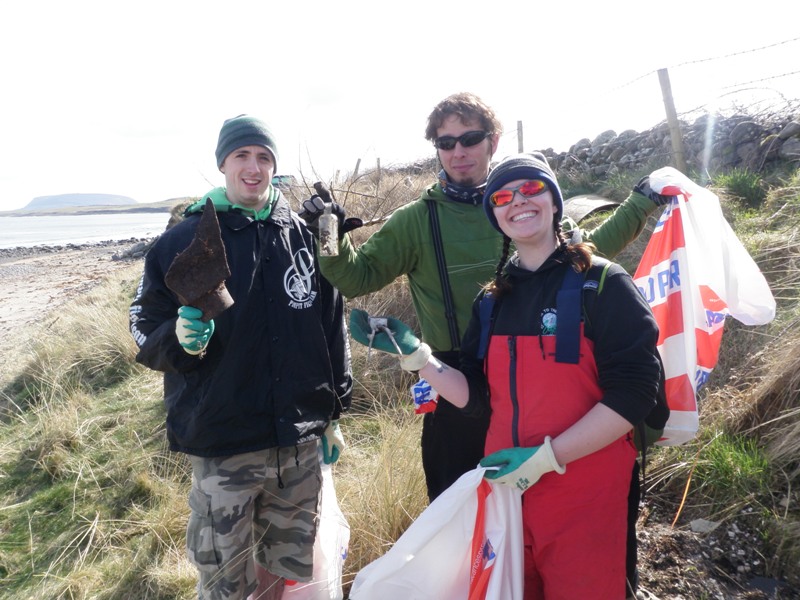 [The crew from Pat. Dublin makes the most of a day away from the store.] 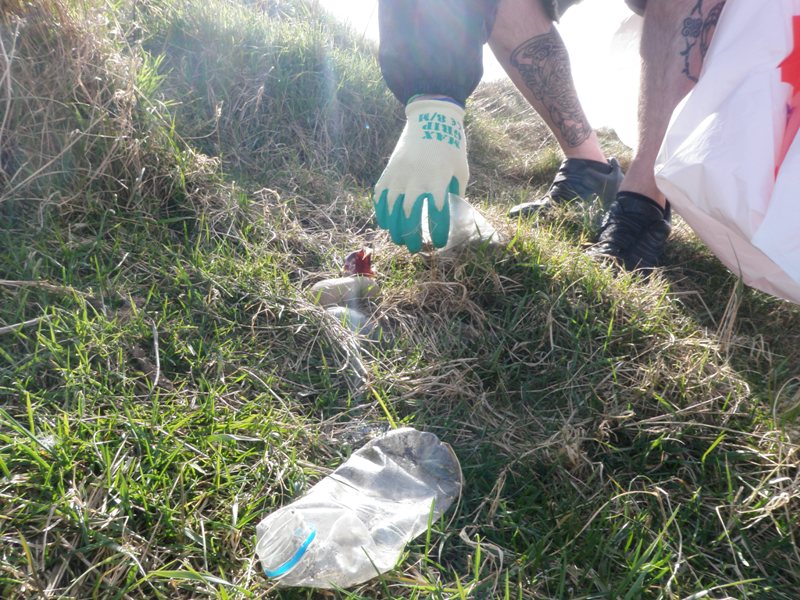 [Unfortunately, littering is a global issue — and one of the first topics discussed on this blog. 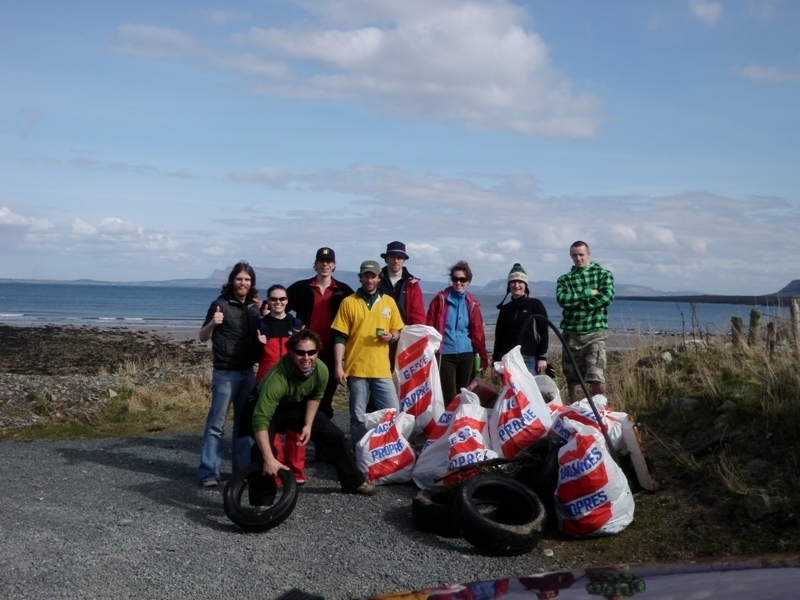 [No waves but many barrels of trash were collected.] 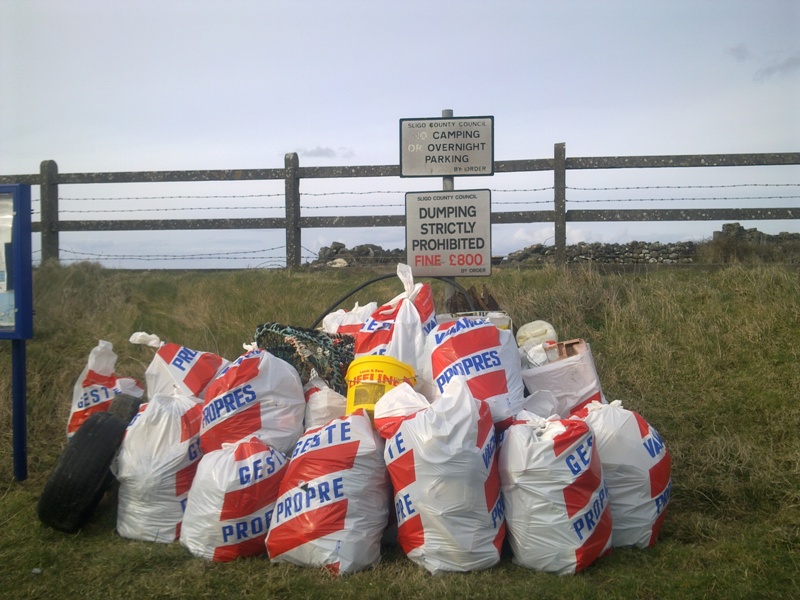 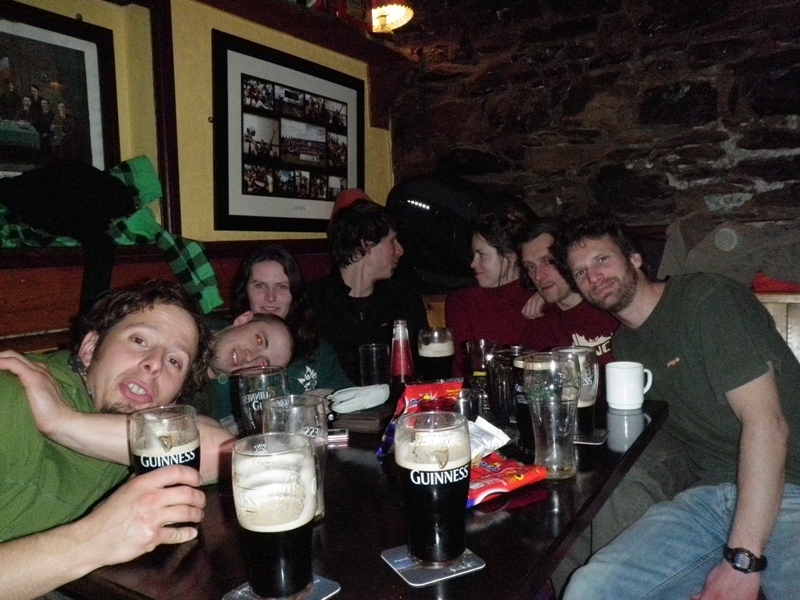 [Cheers to the Dublin crew!]