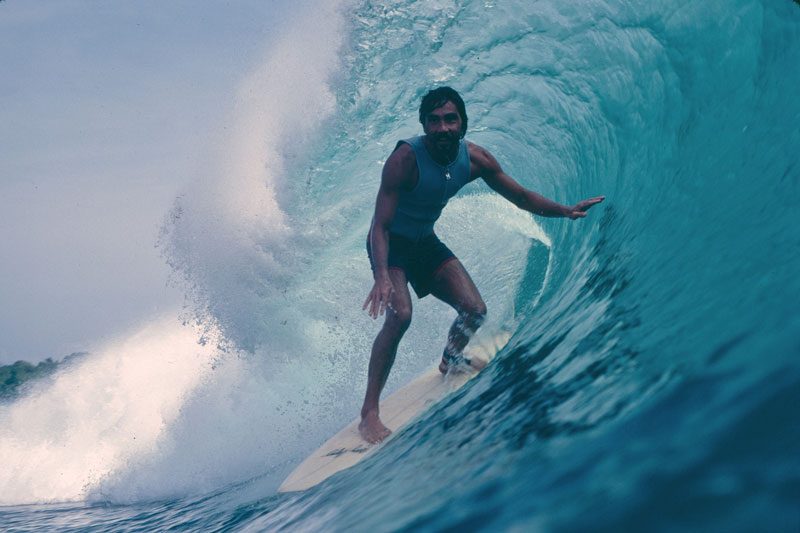 I spent a lot of time surfing a spot in Indonesia called G-Land. Remotely located on the edge of the Alas Purwo National Park, on the southeastern tip of Java, it was, relatively speaking, far from civilization. Actually, as the Indonesian sea eagle flies, it was only about 15 kilometers from the nearest village but with the terrain and local inhabitants in between, it might as well have been a million miles. Residents of that area included the Java tiger, herds of wild boars, the Indonesian wild water buffalo, the Komodo dragon, more deadly snakes than one could shake a stick at… well, I often wondered what I was doing out there with no more protection than a few surfboards.

Patagonia surf ambassador, Gerry Lopez, shares a story today about life before single-use plastics. Read on for some rarely seen photos from the early days at G-Land and an opportunity to join the Plastic Pollution Coalition.

In the mid to late 1970s, we were permitted to build a temporary camp with some bamboo tree houses and a shack to cook in. The lack of human presence made the beaches – the only area we frequented – absolutely pristine. We brought our drinking water in glass bottles, the only containers available at that time. We dug latrines out in the jungle and burned all of our garbage. When the coming of the monsoons heralded the end of the surf season, we left.

When we returned the next year, it was like no one had ever been there. One time, we discovered a mound of rubber slippers in a little nook of one of the rocky sections along the shore. Except for some broken pieces of wood that could have been part of a boat or some huge teak log with sawn ends, there was nothing else to indicate the hand of man. The wood we salvaged to use for our camp, and the slippers came in handy to walk out on the exposed reef if we got too impatient to wait for the high tide to come in. I remember how, back in Bali, instead of using tape to secure a package, tied coconut leaves or vines served the purpose. The natural functioning and simplicity of the G-Land camping made me endeavor to leave as few tracks and as small a wake as possible, in a figurative way of living. 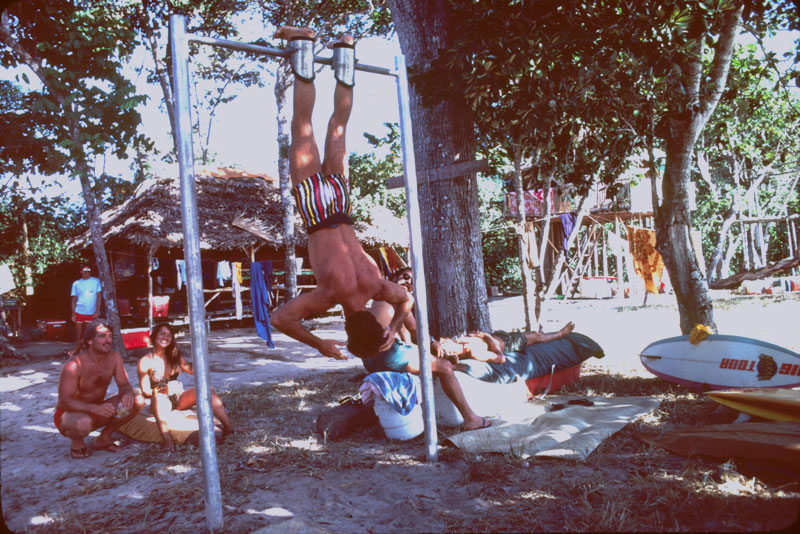 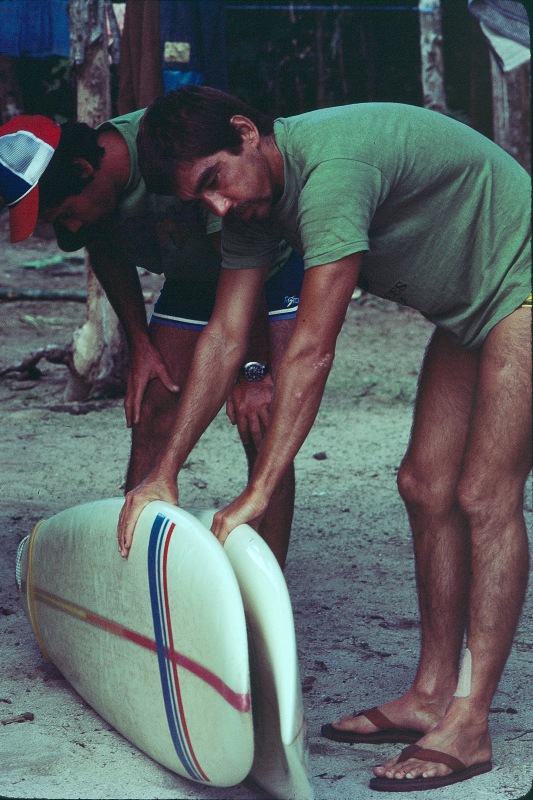 Surfboards were the foundation of our existence out there in the jungle and we handled them with love and devotion. My brother Victor and I compare our equipment. Photo: ©Don King 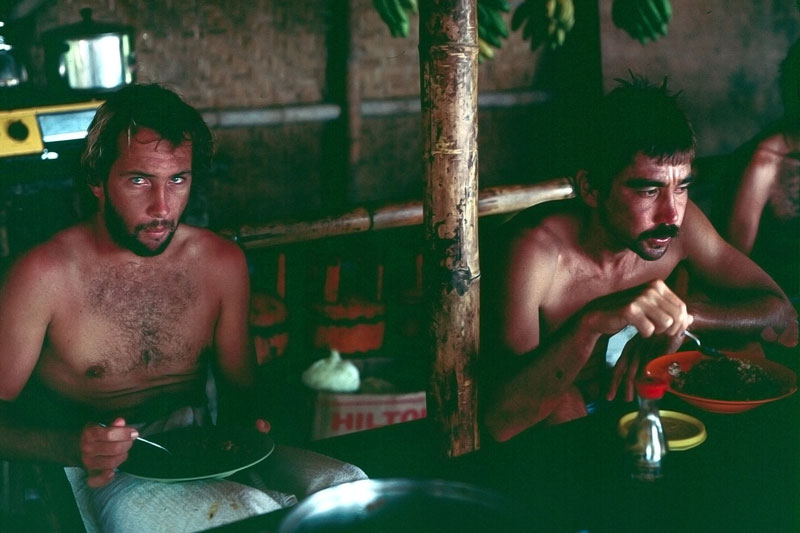 Dinner was serious business. We ate when there was food and went hungry when there wasn’t, but the surf was always a feast. Peter McCabe and I about to lick our plates. Photo: ©Don King

We enjoyed that simplistic surf-camp lifestyle for about three more seasons. Then one year, the water came in plastic bottles, not the glass ones anymore. In the ferry towns of Banyuwangi and Gilimanuk on the Bali side, we noticed that food sold to those awaiting the ferries, previously wrapped in banana leaf, now came in plastic bags. When we got to the fishing village of Grajagan, we saw the shoreline littered with plastic garbage. A fishing boat dropped us ashore on the far side of the bay and, at first, it looked as though the area around our surf camp was as devoid of humanity as ever. Later on, when we walked further up the beach to paddle out to the break, where the high tide swirled the flotsam and jetsam, we hung our heads in shame. By nautical definition, flotsam is the floating wreckage or cargo of a ship; jetsam is something jettisoned to lighten a ship’s load. Either would seem to have a place washed ashore on this Robinson Crusoe-like beach but what we found was neither. Instead, it was simply trash, almost entirely of plastic packaging of some sort. Clear or colored, it seemed infinitely more dirty and unwelcome than the rubber slippers from season’s past. When we asked our camp boys to help us gather this rubbish and burn it, they looked at us as if we had completely lost our minds.

The splendid waves of G-Land never seemed to change and we enjoyed surfing them over the next 20 years. It was a surf paradise beyond compare. And it opened my eyes to how quickly an absolutely pristine, totally natural place can become a mess. Plastic is a problem for all of us. It creates toxic pollution during its manufacture, use and disposal. Recycling is not a solution, every bit of plastic made, still exists. Join the Plastic Pollution Coalition and learn about this epidemic. Maybe it’s not too late. 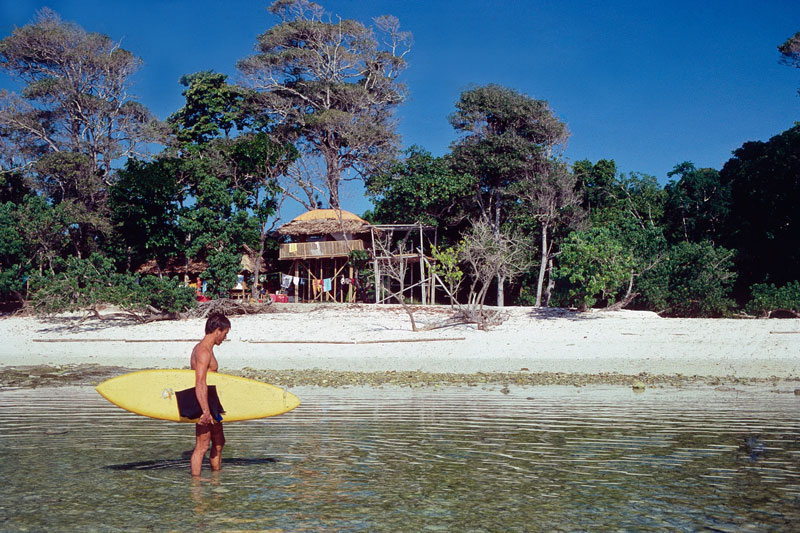 Coming in from surfing all day we were hungry, thirsty and tired, and the camp was an oasis where we could just let it all hang out. Photo: ©Don King

Gerry has lent his voice to the Plastic Pollution Coalition’s mission to bring awareness to the growing problem of single-use plastics, as has acclaimed surf writer, Drew Kampion. Here’s Drew with a rembrance of his own and an invitation for you to join the movement. 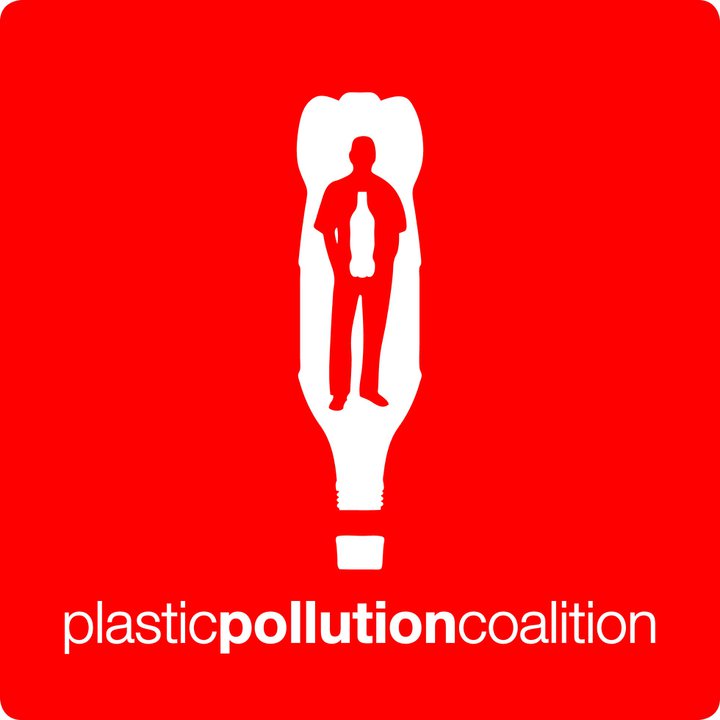 Do you remember life before plastic? Before plastic bags and bottles, and the thousands of other objects that are squeezed or molded into all the familiar shapes and colors that now surround us and define and litter so much of our modern world?

I remember walking along the beaches of windward O’ahu in the late 1960s, combing the meandering line of the last high tide for puka shells and interesting pieces of smooth twisted wood, for worn bits of colored glass and pitted chunks of white coral. Now you walk that same beach and it’s rimmed with a nasty lace of plastic detritus.

Above, Gerry Lopez recalled how it was and how it is. We hope you’ll be inspired to tell a story of your own about this great turning point in the way things are. We hope that imagining how it was will help mobilize awareness and energy for putting this genie back in the bottle.

We’re looking for your personal before-and-after story – a glimpse into how your world was before plastic and how you first came to realize that something big had changed. Can be long, can be short, must be true.

Thanks!
Drew Kampion for the Plastic Pollution Coalition

In this Plastic Pollution Coalition video, Patagonia surf ambassadors, Chris and Keith Malloy, share what they’ve witnessed after years of traveling the globe in search of good waves.

Patagonia surf ambassador Mary Osborne shared her story in a previous post about studying plastic pollution in the South Atlantic Gyre with the 5 Gyres Institute. 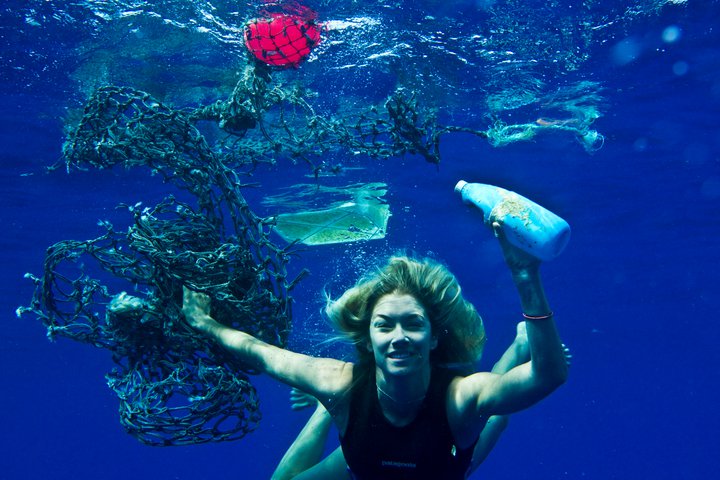 “It is sad to say, but I have seen plastic pollution on almost every beach I have been fortunate enough to travel to: Indonesia, Seychelles, Mexico, France, Costa Rica, Guatemala, Europe, Panama, Maldives, and even my own home town in Ventura County.” Mary Osborne somewhere deep in the South Atlantic; support the 5 Gyres Institute. Photo: Jody Lemmon

This is a challenge all of us must face on a daily basis. Dianna Cohen, Creative Director for the Plastic Pollution Coalition, has some advice on how to get started: “We can help solve this problem. Refuse single-use and disposable plastics everyday; bring your own canvas bag and reusable water bottle.”

You can support the efforts of the Plastic Pollution Coalition by becoming a member (members get an organic-cotton canvas tote) and following them on Facebook and Twitter.

Thanks to Don King and Dick Hoole for sharing their photos with us.

There are few images as iconic as Gerry Lopez calmly slotted on a perfect, eight-foot day at Pipeline. After redefining the art of tube riding on the North Shore of O’ahu, his focus turned to Indonesia, where he pioneered legendary spots like Uluwatu and G-Land. Now based in Oregon, he surfs, writes, shapes, and shreds powder days near his home in Bend.