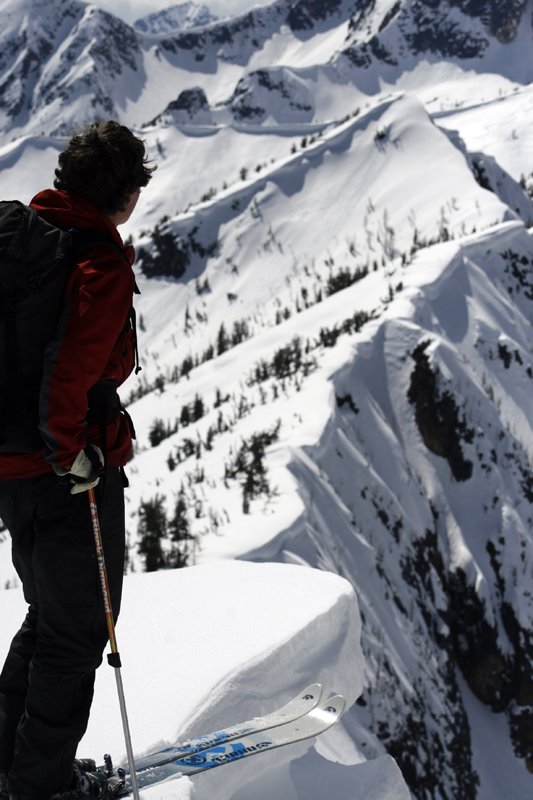 The first snows of the season are forecast for Tahoe! Of course it’s a bit early to think about skiing . . . eh, nevermind. No it’s not.

For those of us with snow on the brain, this weekend’s forecast coincides beautifully with Karhu’s launch of their new blog, Where Will You Ski Today? Karhu’s beautiful synchronicity lies not just with the weather, either. Their ambassadors cover the globe seeking out adventures and putting the latest gear to the test. Some of them happen to be Patagonia ambassadors, too.

Here’s an excerpt from Zoe Hart’s recent post at WWYST?. It’s the first in a series of dispatches from the trip that will be featured on their blog, and a fine compliment to some of the earlier features you may have seen here on The Cleanest Line:

An Introduction: In the spring of 2007, Alison Gannett, Lorenzo Worster and Zoe Hart traveled to Europe on the Global Cooling Tour. It was an appropriate season, one that saw a lack of snow cancel the famed Hahnenkamm downhill for the first time in its history, and it signalled the danger of a changing climate on Europe’s $66 billion dollar ski industry. After seeing years of climate change in France – where ladders now link skiers with ground covered by glacial snow only 10 years ago – the group set out to document glacial recession while ski touring and ski mountaineering through Switzerland’s Berner Oberland.

We all piled our ski bags onto trains, planes and automobiles, everyone coming from different destinations – Susie Sutphin, Lorenzo Worster and Duane Kubischta from California, Alison Gannett and Jonathan Copp from Colorado, and me from Chamonix. The plan was to meet at a little hostel in Interlaken called the Happy Inn – how fitting – to start our trip.

I hopped off the train from France, happy to have a Patagonia wheeled bag finally, instead of wearing holes through my old dragging duffle. After a few minutes walking I spotted another person with a ski bag, a wheeled bag and a hood. Alison met eyes and laughed – we had been on the same train. Pulling headphones from our ears, we chatted excitedly the last two blocks to the hostel. Alison turned out to be the only one to lose bags in transit, but they had arrived on the next plane after a few hours of reading in the airport. All was set; we could leave the next day.

To read more about this trip, click here, or the visit the Chasing Glaciers website.  And in case you missed it earlier this month, check out our earlier post about Jonathan Copp’s recent climb of Shafat Fortress in Pakistan.