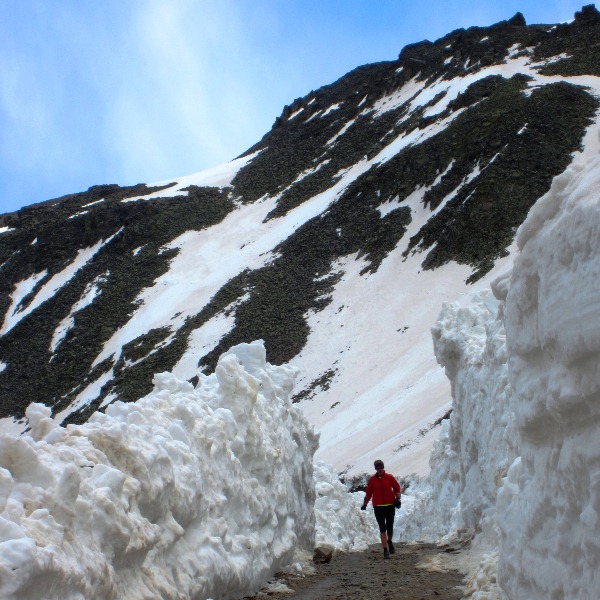 From my house, at 9,800 feet elevation in the Colorado Rockies, I have to run downhill first. Above is sealed under feet of unrunnable, soft, post-holing snow. So it’s downhill, passing beneath nine avalanche slidepaths on a snow-packed road, often in a howling, pushy wind that streams old snow around in phantoms. I wear neon colors so that drivers can see me emerging from those white squalls. Through my clothes, the blasts to my skin feel more like a burning than a chilling.

As I descend, the open valley drops between the ridges, and conditions improve. I can see the road underfoot now, though it’s dark because of my sunglasses, necessary only to protect my eyeballs from being pelted. While I can see, I step on the crinkled tracks from tire treads and chains, which provide traction, or I stay in the loose snow on the road edges where there is no ice. Still, a leg shoots out wildly and my heart jumps as I find a way to get it back under me and recover my balance.

A thousand feet lower, I’ve passed under a shifting cliffband that fires down cannonballs in the afternoons when the snow melts, and now I’m protected from the wind, running under giant cottonwoods that creak and tinkle. Still descending, I feel warm and happy to be out observing the frozen beaver ponds and brittle reeds, the clean, white meadows. If the sky is grey, inevitably little white feathers appear and do not melt when they land, and then whole pillows of them fall, and the wind thrusts down, so that when I reach my goal distance and turn around it holds me in place for a second.

Moving uphill into the wind is when I have to exercise willpower: “The faster you go, the warmer you’ll be.” My forehead freezes despite the wool ski hat I wear, sort of like an ice-cream headache, without the ice cream, just the energy drink in my water bottle, a slushy that ices me on the inside when I swallow it. The air seems to be making tiny incisions in my lungs, and the snow feathers buzz down my throat like ghost flies. Soon my glasses fog up and the fog freezes so that I’m nearly blind. “The faster you go, the sooner you’ll be home.” If a car stops and the driver offers me a lift, I answer, “No thanks,” frozen-faced, like somebody who just got a tooth pulled. After the car vanishes, I feel a little wave of self-pity. Usually, there are no cars.

One day, I round a corner in time to see a coyote trot across the road and up the hillside, where it stops next to another coyote, and they both stare down at me. “Two?” I usually see one alone, if any. Still shuffling uphill around the corner, I break stride. Another coyote stands on the far side of the road, looking at me impassively. The eyes of this third one, its body motionless and face expressionless, follow me as I carefully cross between it and the others on the hillside. “Three coyotes versus one tired, freezing woman,” I’m thinking, and aloud I say “Don’t!” to the closest one, for what it’s worth. Its dark eyes convey neither aggression nor fear.

Back home, I close the basement door, quickly shutting out the white howl like someone in a B horror movie. Snow dust hits the glass pane. My hands are too numb to undo the knots in my shoelaces, so I just stand there huffing interjections. “Are you okay?” my husband asks, coming over and cupping my hands between his.

Though I love backcountry and Nordic skiing, I mostly endure winter running as a necessary activity to prepare for summer ultra-racing. With no affordable gym within an hour’s drive and no room in our house for a treadmill, I submit myself to Ullr, Lord of Winter, and hope for mercy. I’ve learned that keeping a gator over my mouth allows me to run with bronchitis, though the tradeoff is asphyxia, and that, in a pinch, I can use puppy pick-up bags for gloves. And I’ve come to appreciate the solemn beauty of those winter runs – the blue-lit slopes, the forest of leafless trees creating a delicate veil over the hillside, snow banners combed from the ridges across an alpenglow sky. When the earth shifts and the road thaws, I come home with mud coating the backs of my legs. One afternoon I see a flash of movement and my first thought is “coyote,” but it is sky crossing the surface of water in a gap between reeds, the ice now gone.

Late in spring I’m 40 miles into a race outside of Bryce Canyon National Park in southwestern Utah, climbing out of Big Hollow. It’s a south-facing airless hillside with little shade and a relentless afternoon sun. I’m feeling stumbly and sleepy in the heat. “If only,” I actually have the nerve to think, “if only an icy gust would blow on my face.” So fickle is the memory, so ephemeral the seasons. 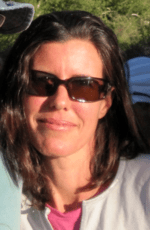 Rhonda Claridge teaches English at Colorado Mesa University. In her free time, she writes and runs long distances in the Southern Rockies. In 2013, she ran the length of Great Abaco Island in the Bahamas, 120 miles, to raise money for conserving reefs in marine parks.