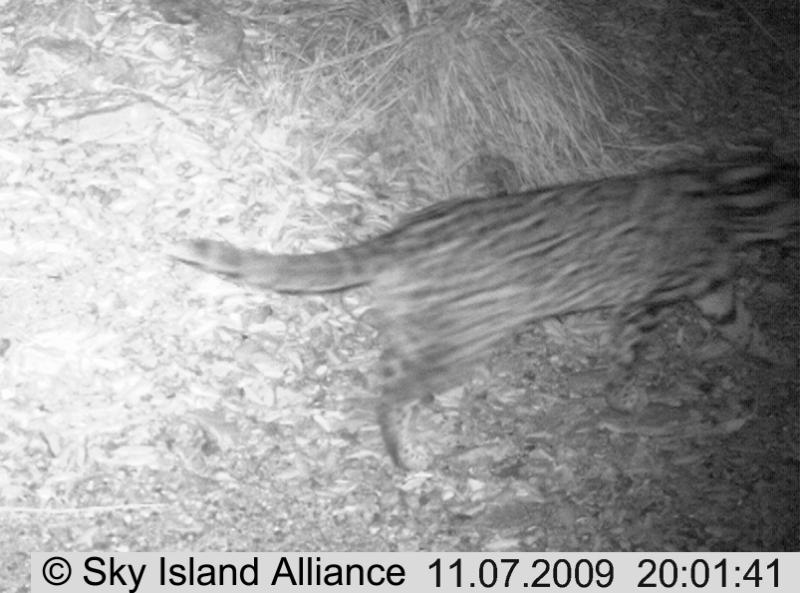 Witness for Wildlife is a new program where folks like you can become citizen naturalists and help make the mission of Freedom to Roam a reality. Who knows? You might just score a rare photo like Michael Quigley did on his Witness for Wildlife trip. [The ocelot recently photographed in Cochise County, Arizona. Photo: ©2009 Sky Island Alliance.]

With an Ocelot: Mystery, Integrity, and Hope Remain
By Michael E. Quigley

It was a beautiful autumn day in southern Arizona and I was hiking a canyon in a sky island mountain range with my friends and colleagues Bart Koehler and Kate Mackay as part of the Freedom to Roam and Witness for Wildlife efforts — local people advocating for the importance and protection of wildlife connectivity corridors. Thanks to generous assistance from Patagonia, I had two remote cameras in my pack and we were looking for good places to set them.

In one particular place, the canyon widened and was divided by a small island of trees and brush. On one side, a large tree grew from the bank — a splay of trunks, overhanging branches, exposed roots. The tree had character–and a good branch where a camera would have a view of the trail. We dropped our packs and set to work. Excitement, anticipation and nervousness mixed as I checked, double-checked, triple-checked the batteries, the memory card, the settings of delay and sensitivity for the sensor and camera. Visualizing how an animal might move through the canyon, we attached the camera to the tree with straps and cable — securing it and aiming it. I hunched next to the set camera, my eyes at lens level, and took a long look at the scene. I imagined a deer, or a bobcat, or possibly a lithe mountain lion passing by. I wondered what the camera might see. As we gathered our packs and hiked out, I glanced back at the camera as if I’d released a balloon or cast a message in a bottle — a gesture of uncertainty, of longing, of hope.

In April, Gene and Bernice Isaacs, two long-time and well-trained Sky Island Alliance tracking volunteers, offered to retrieve the memory cards and change the batteries. When they did, there was something amazing on the card: an image of an ocelot.

An ocelot! Ocelots, tropical cats, ranging into northern Mexico and Texas, are slightly larger than bobcats and have long tails and spotted and striped fur. As it turns out, this image is the first-ever record of a live ocelot in Arizona! The news made headlines; put smiles on people’s faces. In the 21st century, in one of America’s fastest-growing states, there is an ocelot–and there are jaguars, mountain lions, bears, bobcats; javelinas, coyotes; hawks, falcons, eagles; bats, hummingbirds; big-horn sheep, badgers, skunks, coatis, ringtails — so many wild species sharing the land with us, so many wild things surviving and thriving and going about their business. The world is a connected place, wildlife needs habitat, and we must be good stewards. 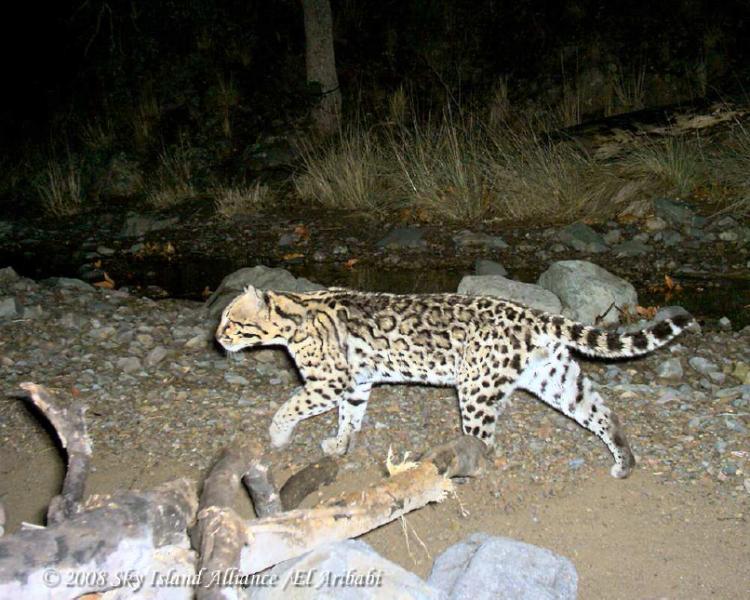 [An ocelot photographed in northern Mexico, in an area biologically connected to the region in the U.S. where the Arizona ocelot has been discovered. Photo credit: ©2008 Sky Island Alliance and Rancho el Aribabi]

After the ocelot photo, I went back to that canyon. I hiked to where that camera was set. I looked at that place carefully and quietly. It’s a canyon like so many sky island canyons: threading between cactus-covered hillsides, bright in the center, dappled sunlight on the edges, rocky and sandy underfoot, some banks undercut. Water is scarce in this land, but one can see how water has shaped the canyon. One can imagine a time after the rains when water might flow down this canyon, giving it form and life. One can imagine an evening just after sunset when an ocelot might saunter by that very spot. I set that camera one afternoon with tangible goals in mind. And I set that camera with a desire for connection, with faith that the world is still functioning and wonderful. I received confirmation, a blessing: an image of an ocelot; and with that ocelot the knowledge that mystery and ecological integrity and hope for the future remain — in the canyons of southern Arizona, in Wilderness, and in our hearts.

For more on this discovery, download the press release (PDF, 3.3mb). Then, head over to Witness for Wildlife and join the other citizen naturalists who are taking great trips, telling great stories and giving wildlife the Freedom to Roam. This is your chance to get involved!

[With thanks to Sky Island Alliance, a grassroots organization dedicated to the protection and restoration of the rich natural heritage of native species and habitats in the Sky Island region of the southwestern United States and northwestern Mexico — one of the many non-profit Partners who’ve teamed up with Witness for Wildlife.]