An open-pit mining boom is underway in northern British Columbia, Canada. The massive size and location of the mines—at the headwaters of major salmon rivers that flow across the border into Alaska—has Alaskans concerned over pollution risks posed to their multi-billion dollar fishing and tourism industries. These concerns were heightened with the August 4, 2014 catastrophic tailings dam failure at nearby Mount Polley Mine in B.C.’s Fraser River watershed.

Last summer, as part of production for Xboundary, we completed a 100-mile transect of the Unuk River watershed. What follows is an excerpt and action alert from an interview we did with Trout Unlimited Alaska after the trip, who, along with Patagonia, sponsored our project.

Trout Unlimited: You went on this epic journey down the Unuk River from its headwaters to the sea. Why?

Ryan Peterson:  I wanted to understand and film the place from the inside out. The upper watershed is especially remote and I thought it might make for some special shots. So we flew into a lake at the headwaters in B.C. and followed it to the ocean in Alaska, being about half on foot and half in these lightweight boats called Alpacka Rafts. It definitely gave us both a taste of how rugged the place is and exactly how crazy it is to consider putting North America’s largest open-pit mine in the middle of it.

In a wet and seismically unstable part of the Coast Range, Seabridge Gold wants to develop North America’s largest open-pit mine, KSM. Acids and other toxic chemicals can seep from such mines and local residents are concerned about them ending up in the salmon-rich Unuk River. Photo: Gordon Klco 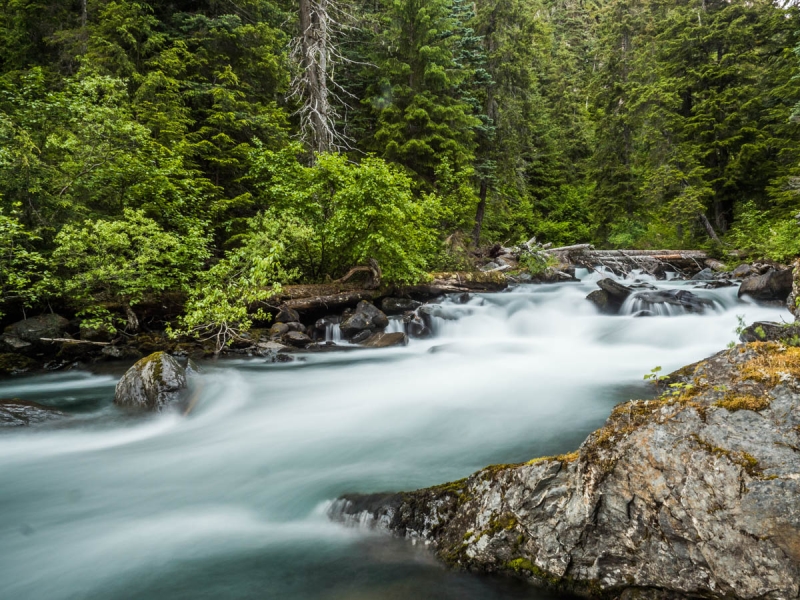 The Unuk is known for cold, clean water and untouched forests—perfect salmon habitat and the basis of multi-billion dollar fishing and tourism industries in Southeast Alaska. Photo: Travis Rummel 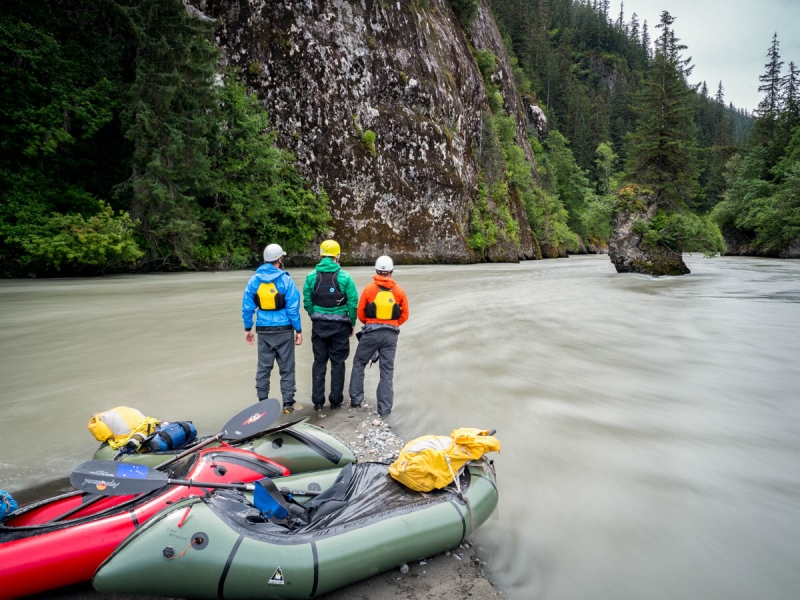 TU: Is this the first time a source-to-sea expedition has been done on the Unuk?

RP: As far as we know. Lots of people utilize the lower river, but we couldn’t find any first-hand accounts of the extreme upper B.C. part.

Travis Rummel: We thought we could just put our boats in on a lake and float out. But from the air we realized it was radically different than what we expected. It was way higher gradient and just more rugged country than I was prepared for. I vomited as soon as I saw what we were going to have to hike in, the scale of the country.

TU: Can you describe it?

TU: No, the topography.

TR: I had eaten a lot of poutine before I got on the plane and that’s what I think really got me. But the pilot was just circling around this really tight canyon country. It was very big, very steep and very wooded. There was no clear space to walk through it. And the upper river is very high gradient. It’s Class 5 waterfalls and log jams and there’s no bank we could have rested on. The devil’s club—a thorny shrub with sharp spikes—was all around us at points and we had to tunnel through it. It was very prehistoric and, for lack of a better word, pristine.

RP: And you’re under rainforest canopy so it’s not like you’re cruising along looking at these amazing vistas. It’s dark. It’s tree after tree. You can’t see more than a hundred yards in front of you. After five days we came to a point where we could finally float. We thought, ‘Oh, thank God, that’s the end of that. Now we can just mindlessly sit in our boats and look at the scenery.’ But the velocity of the river was so intense, and the lava canyons were so tight, there was no second of any day when you were not giving full attention to your own safe passage.

TR: Our friend, Gordon Klco had way more boating experience than us. He’d paddle ahead and point in the direction we should follow, and told us to actually paddle hard, not just take these wimpy paddle strokes which Ryan and I started out doing, but to paddle like your life depended on it, which we learned pretty quickly it did. 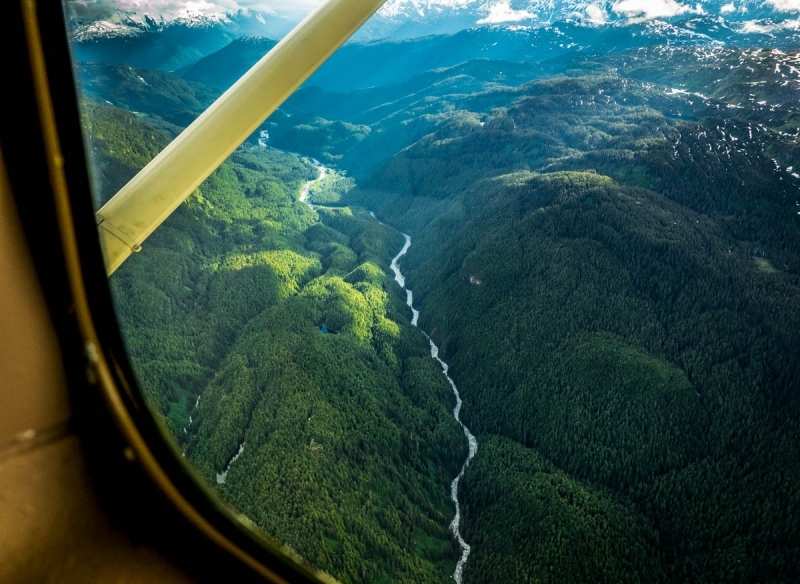 The immaculate upper Unuk River. Upon realizing the team would have to be on foot for 35 miles through some of the thickest rainforest on Earth, Rummel puked. Photo: Travis Rummel 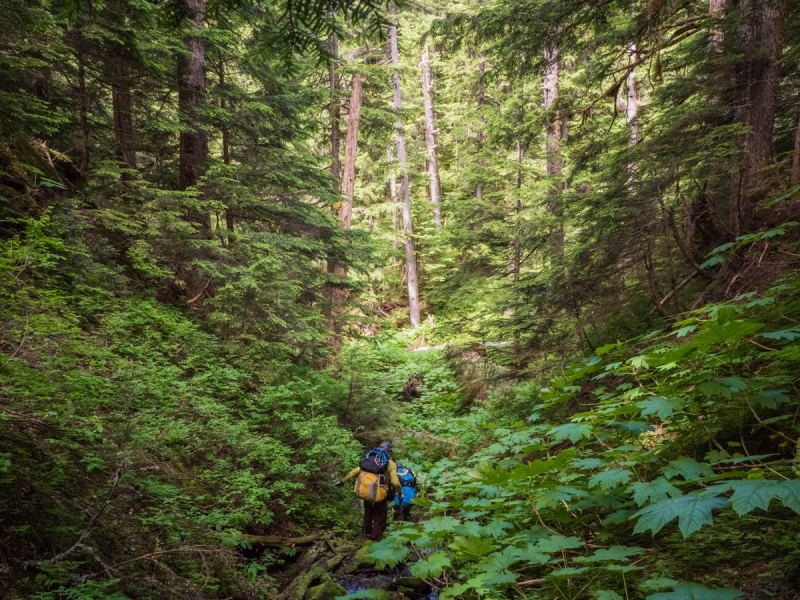 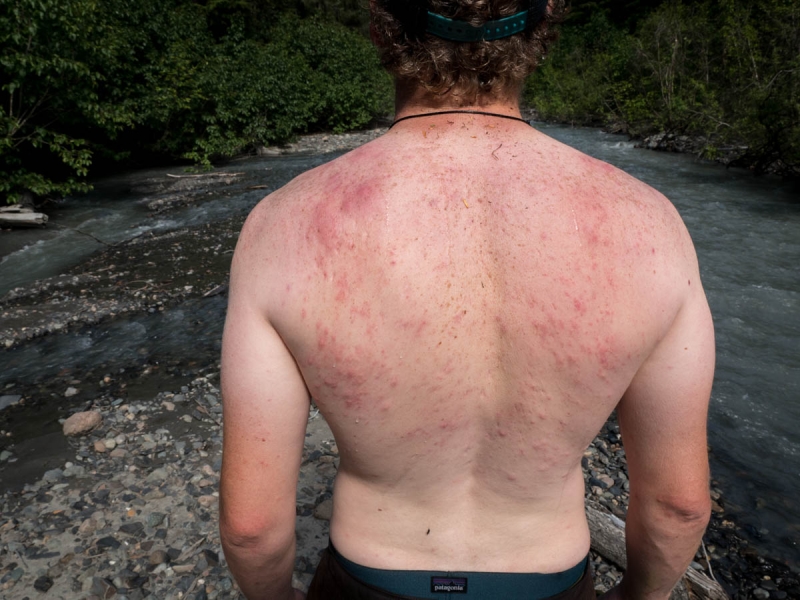 Sun and breeze were a welcome relief upon reaching the boatable portion of the expedition. Klco’s back reveals the toll taken by mosquitoes and thorns during the five-day bushwhack. Photo: Ryan Peterson 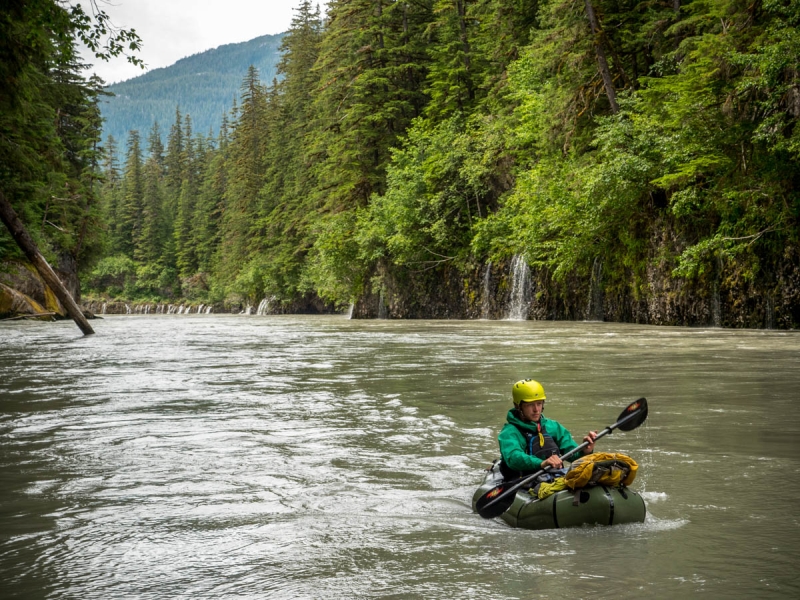 Klco pulls into an eddy in the Unuk’s seldom-seen veiled lava canyon. A lava flow once dammed the valley here. The river has since cut its way through as peripheral aspects of the aquifer pour out of the rock. Photo: Travis Rummel 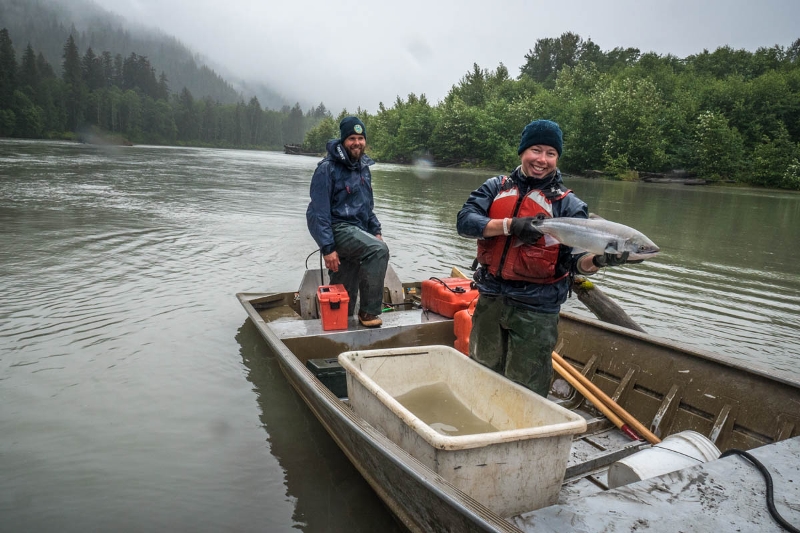 AK Dept. of Fish & Game technicians prepare to release a sockeye salmon from a sampling site near the estuary. Photo: Ryan Peterson 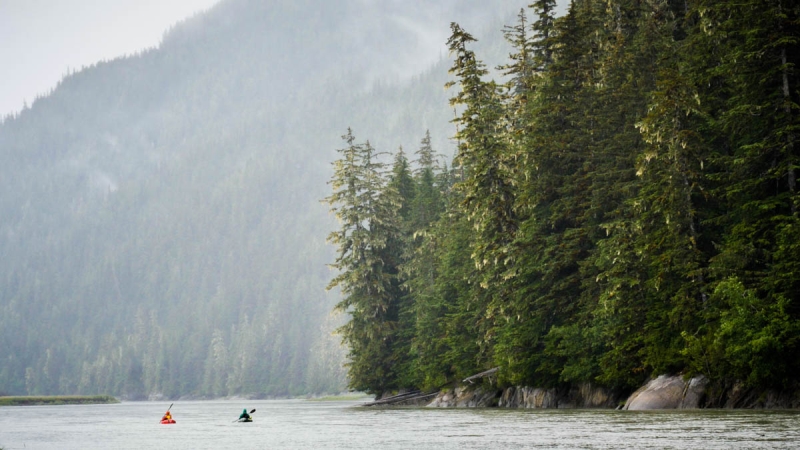 The Unuk terminates at Burroughs Bay, in Alaska’s Misty Fjords National Monument, a sacred site of traditional fishing and hunting for the Tlingit and Haida people. Photo: Ryan Peterson

TU: Were there any signs of civilization?

TR: We passed a former mine camp. It was just a shithole. You could tell that stuff was helicoptered in and when they left they didn’t want to pay to helicopter anything out. So they just left it there. Literally sheds filled with garbage.

TU: I understand you began doing interviews in Alaska for this film on August 4th, the same day of the Mount Polley mine disaster in British Columbia. What was it like to go there a month later?

TR: It was telling that a month later there was no cleanup and they were just racing to rebuild the tailings dam so they could get the mine up and running again. It was insane to me. A lot of the residents got their water from Quesnel Lake which was directly downstream from the tailings dam, and no one wanted to take showers or drink the water. People were just very scared and they didn’t feel like they were getting answers. And just the fact that this was Mount Polley was astounding. It had only been operating for 17 years. It was a modern mine, with modern technology and it was the industry’s shining example of how mining, clean water, and salmon can co-exist to do things right. And that’s what failed. 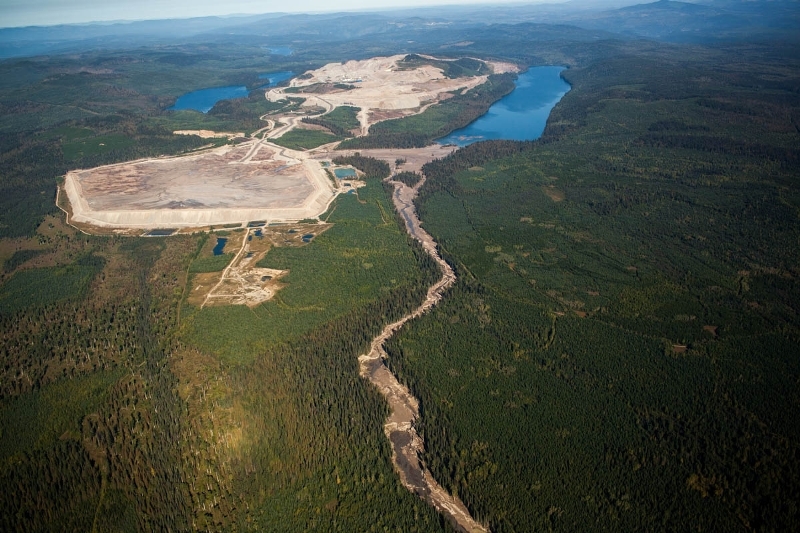 Mine waste gushing from the August 4, 2014 catastrophic tailings dam failure at Mt. Polley Mine in the Fraser River Watershed of central B.C. destroyed Hazeltine Creek. Long term affects to fish and wildlife won’t be fully understood for years to come. B.C. Mines Minister, Bill Bennett, meanwhile has compared the spill to the “10,000-15,000 avalanches that happen every single year [in B.C.].” Many transboundary region residents see it as a real-life example of the risks involved in large-scale open-pit mining in salmon watersheds. Photo: Gordon Klco

TU: What do you hope people will come away with?

RP: Fishing and tourism in Southeast Alaska are multi-billion dollar industries that are pretty much as healthy as you can get, not to mention the basis of a culture. Unlike the Pebble Mine situation in Bristol Bay, though, there’s no automatic way for Americans to have their concerns about these mines heard. Canadian industry can do what it wants and Alaskans downstream are caught in this geo-political loophole. But there’s this kind of obscure treaty—the Boundary Waters Treaty—from 1909. It has protected water in Montana from coal mining pollution in Alberta, and provides a clear way for protections to be implemented in Alaska and B.C. It will just take enough people getting fired up to push their voices through to the U.S. State Department.

Red Chris Mine on the Stikine, meanwhile, opened on February 3rd, and other transboundary mines are just waiting for final-stage approval or financing to start. This is the time, right now, for Americans and Canadians to speak up.

Contact the U.S. State Department and the Alaska Congressional Delegation and tell them to stand up for Alaska by ensuring protection from Canadian open-pit mines.

TAKE ACTION at Salmon Beyond Borders

Travis Rummel’s award-winning documentaries include Red Gold, on the proposed Pebble Mine in Bristol Bay, Alaska, and DamNation, on dam removal efforts in America.