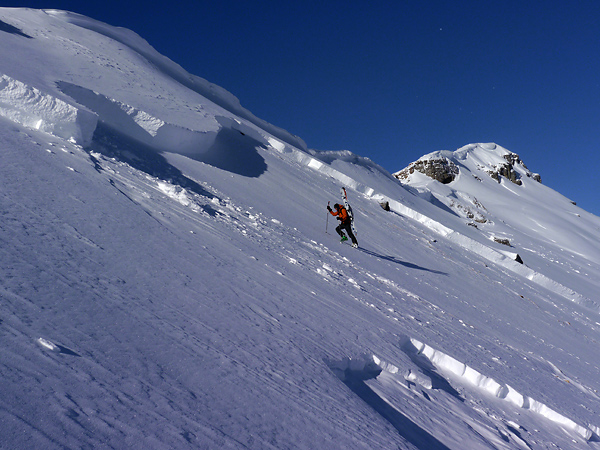 I’m sitting in a bar with Doug Chabot, director of the Gallatin National Forest Avalanche Center. The man has more enthusiasm for snow science, alpine climbing and general life than about anyone I know. And the best part: it’s infectious.

We are both a couple beers deep before our pizza arrives. The conversation floats, with laughter and zest. We talk of the day, the avalanche activity we investigated and the landscape surrounding the tiny mountain town where I live and work as a ski guide. “It’s a special place, no doubt,” Doug says with authenticity. I nod my head and gesture with deep agreement. Nowhere else quite like it I figure, as far as quality mountain towns go. Obviously, the topography is an integral aspect, but it’s the weather and snowfall that sets the place apart.

“I figure there are quite a few of these incredible mountain microclimates, scattered amongst the Rockies,” Doug says. “Out in remote corners of Colorado… high valleys that receive 600 inches of snow a year. The thing is, they are in the middle of nowhere, so no one knows about them!” he laughs.

I shrug and counter that you’d be hard pressed to find another place quite like the one where we currently are. Probably up in Canada, or maybe over in Europe, or Asia, I concede. The idea helped fuel my interest in an exploratory trip to Kyrgyzstan a few years back. See there’s this giant salt lake, Lake Issyk-Kul, with 5000-meter peaks to the west of it. And having experienced and studied the snow in the central Wasatch of Utah, I knew what a cold northwest flow over a desert salt lake and some quality orographic lift can do for snowfall and density. Just ask the folks up at Alta. Turned out however, that the utopian combo of microclimate and mountain range remained elusive (at least for this foreigner). Access challenges perhaps. Though I guarantee I haven’t been the only one to rationalize such logic while looking wild eyed at a map of eastern Kyrgyzstan and the Tien Shan mountains. 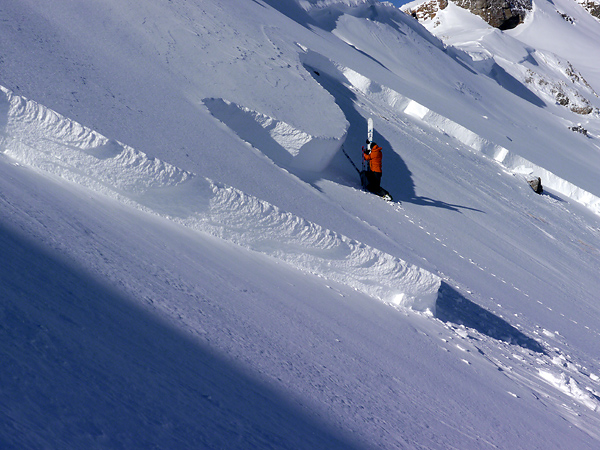 By investigating recent avalanches, and studying the snow structure nearby, Doug learns details that help him forecast for future slides. With constantly changing weather, and increasing numbers of people traveling in the backcountry, Doug definitely has his work cut out for him. Photo: Beau Fredlund

Soon the story telling swings over to Doug. Chabot has been passionately getting after it for decades, and you know that can only mean buckets of genuinely real and exciting stories. It wasn’t until the next morning that I woke up scratching my head. Did he make that up? Sure, the beers were flowing, but a crystal ball, in remote Tajikistan? Had to have been a dream.

Nope. I talked to Doug a couple days later, “Am I making that up? What’s with this high mountain crystal ball? A weather shaman?!” Sure enough, the story unfolds with Doug on a recent alpine climbing trip into the Pamirs of eastern Tajikistan. He ended up meeting a man named Sharaf, in a remote village at 3737 meters. Sharaf’s job, and one he took to with the utmost diligence, was recording the weather, manually, eight times a day, for the last 30 years! He is employed by the Russian federation, and now calls in his weather observations daily, a change from previously sending in his ledgers monthly. Furthermore, he usually does all the measurements himself, which means his sleep comes in increments of less than three hours every day, year after year! To make matters even more interesting, he works with a version of the Campbell-Stokes sunshine recorder, and an abacus for calculations. The dude is legit.

The first thing that caught my memory the next day was this crystal ball, this sunshine recorder. Apparently, it burns a mark into a piece of paper to document the time and duration of sunshine each day. Perched in a high desert at 3737 meters, I get the feeling this weather instrument is akin to something you’d see in a James Bond or Lord of the Rings film—part secret weapon, part prophetic talisman. But what really sticks with me is how Doug describes Sharaf’s appreciation for his job. Through war and political turmoil, he’s had a job the WHOLE TIME. That means food, and security, and peace of mind—more or less, everything. 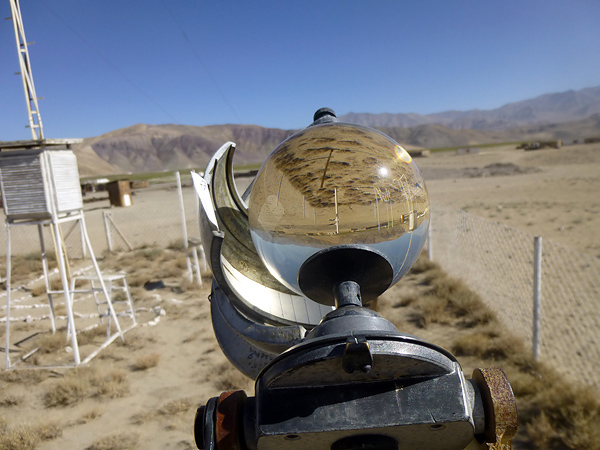 A crystal ball?! Science fiction? Nope, that’s a Campbell-Stokes sunshine recorder, a device that documents the hours of sunshine during the day. This one here is at a remote weather station in eastern Tajikistan. Photo: Doug Chabot 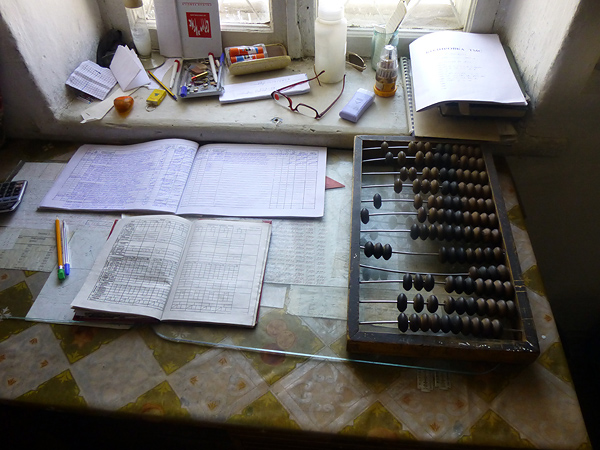 The abacus, a mathematical tool developed thousands of years ago, yet still being used today. Got to love a simple design that stands the test of time. Photo: Doug Chabot

For those of us that keenly study the weather on a daily basis—for avalanche forecasting or mountain guiding—the idea of this guy doing his thing over in the Pamirs, every three hours for the last 30 years, is absolutely wonderful. Talk about discipline and Zen simplicity. Add in the primitive tools and the fundamental nuances of mountain weather, while factoring in conceptions of Central Asian culture and geopolitics, and Sharaf’s gig really resonates.

What I dig about the weather is that it’s what we all have in common. Obviously, the sky is going to look different above each mountain town, the snowpack different at each weather station, but it is always there. The wind, the temperature, the precip: always changing. Maybe the Earth will trend toward more severe weather—increasing occurrence of droughts, more hurricanes, more avalanche activity, perhaps. But the weather will remain a common denominator for conversation. “How’s the weather over there?” It’s the basis for small talk amongst friends and strangers alike.

It’s also a small world, and I feel a great connection to anyone who appreciates or simply observes the weather. Folks who live with urban tunnel vision, hardly aware of the air, they have my sympathy. It’s the farmers, the ski patrolmen and the fisherman studying the ocean. It’s guys like Doug Chabot, with his nose in the snow and his eyes scanning the horizon in a vacuum of curiosity. It’s that awareness that glues us together as people under the same sheltering sky. Hopefully, as our climate changes, that tide will continue to connect us. For you know what they say about the weather: If you don’t like it, just wait five minutes. 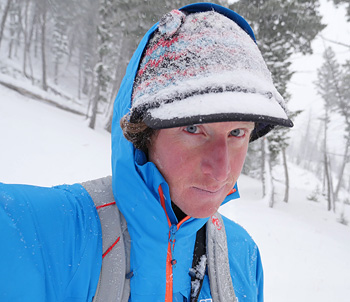 Beau Fredlund is a backcountry ski guide and photographer who lives in Cooke City, Montana. He loves ski mountaineering and has been fortunate to experience wonderful places like Norway, New Zealand, Alaska, Canada, Kyrgyzstan and Kamchatka. He is most passionate, however, about studying and exploring the landscapes of the Greater Yellowstone Ecosystem. Check out some of his day-to-day on the Cooke City Chronicle or on Instagram at @bfredlund.