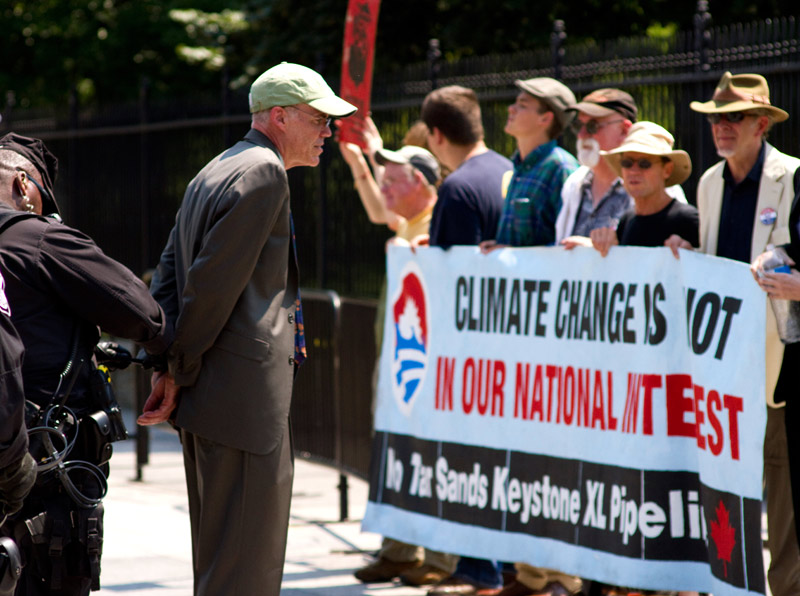 For the past four days, concerned groups of Americans have gathered at the White House in protest of the Keystone XL Tar Sands Pipeline. Our friend and founder of 350.org, Bill McKibben (pictured, photo: Shadia Fayne Wood), was arrested on Saturday along with 64 other brave people for engaging in a non-violent action of civil disobedience in front of the White House. Their goal is to send President Obama a simple message: “Stop the Keystone XL Tar Sands Pipeline.” Today, we’re asking you to send the same message.

The protests are being organized by TarSandsAction.org will continue over the next two weeks. But the President needs to hear from every person on the planet who’s concerned about a dangerous and destructive project that would pump over one million barrels of dirty “tar sands” oil from Canada to the USA … every day. Here’s how you can help:

1. MOST URGENT: Sign the petition at 350.org telling President Obama to reject the Keystone XL Tar Sands Pipeline. The pipeline cannot be built without a “presidential permit” from the Obama Administration. 350.org are hoping to add as many names as possible before they deliver it to White House officials on September 3rd.

2. Send in a solidarity message or photo to the people taking action at the White House.

3. Take part in Moving Planet – a worldwide climate rally on September 24 – and move beyond all fossil fuels in the loudest, most beautiful way possible.

If you’re unfamiliar with the Keystone XL Tar Sands Pipeline project, continue reading for a list of background links and a video highlighting the first day of sit-ins at the White House.