Despite their imposing numbers and size, most people never give dams a second thought.

Patagonia founder and owner Yvon Chouinard is not one of those people.

When he sees dams, he sees broken waterways, an antiquated way of thinking and a means of generating energy that is far from green. He also sees the potential to mend the damage by taking down dams.

Chouinard, along with his son-in-law, fisherman and biologist Matt Stoecker, are at the forefront of a growing movement to decommission dams in America. The best way to do that, they figure, is by raising public awareness and support. And they believe the public will only support dam removal if they understand the complexities.

That’s the idea behind DamNation, a feature documentary produced by Patagonia and Stoecker Ecological in conjunction with the Colorado-based filmmaking team Felt Soul Media.

The film, which will be released in spring 2013, explores successful dam-removals, looks at dams that are subject of current removal fights and shines a light on others eyed for future dismantling. It paints the history of dam building in America, and chronicles the evolution of dam-busters from the radical monkey-wrenchers of yore to the tie-wearing coalition-builders of today. It focuses on some of the pivotal figures on either side of the dam issue. 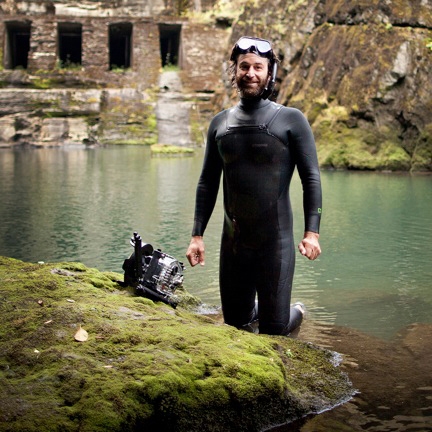 Matt Stoecker, DamNation’s co-producer and underwater cinematographer, takes a break above water while filming below the Elwha Dam before its removal. Photo: Ben Knight

Though Chouinard and Stoecker aren’t shy about their position on taking down dams, DamNation seeks to explore the issue fairly. The filmmakers interview the farmers who rely on dam to irrigate their fields, Native people whose cultures’ depend on the salmon that dams have destroyed, and legislators who view dam opponents as environmental extremists. They speak with scientists, dam employees and others.

“Our goal is to let the audience make up their own minds by giving them all sides of the issue,” Rummel said. “I don’t think it’s a black and white issue where it’s take out every dam.”

Despite their usefulness, dams have hugely impacted the rivers they were built in, and many have outlasted their purpose.

“I think the public is unaware of this,” said Chouinard. “I don’t think they realize that there’s a lifespan for these things.”

Chouinard has been working for two decades to take out dams, and he has discovered a pattern. Efforts typically begin with a small grassroots group that faces a steep uphill battle. Opponents are powerful, red tape is plentiful and many who are involved are resistant to change. If the group does manage to make it through the bureaucratic and permitting thickets and gain funding, support and success, it’s only through years of really hard work.

“But then the dam comes down and the river begins to almost instantaneously heal,” Chouinard said. “And then there’s not one person who says, ‘gee that was a mistake.’”

The impetus for DamNation came from the desire to mainstream dam removal by showing the many benefits that result. Stoecker, who worked to successfully remove his first dam 10 years ago, noted that while dam-busting used to be a fringe idea, it’s now one routinely considered by governments and dam owners, as well as environmentalists.

A good example of this new mindset, he said, can be found on the Elwha River in Washington, where a coalition of Native tribes, environmental groups and government officials worked together to take out the biggest dams in U.S history — the Elwha and Glines Canyon dams in and near Olympic National Park (a project featured in the film).

“There are wild steelhead and salmon returning to the river above the Elwha Dam site before the project’s even done,” Stoecker said.

“I just hope it gets around to a lot of people and changes their way of thinking about dams,” he said. “I’d like to see a few more dams come down in my lifetime.”

Katie Klingsporn is a journalist and editor who writes about life in the West. She lives in Wyoming with her family, where she works as the managing editor of the nonprofit news site WyoFile.